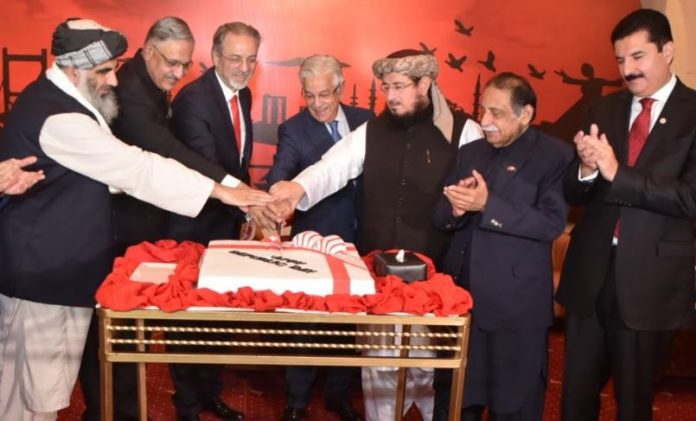 ISLAMABAD: Ambassador of Turkey Dr. Mehmet Pacaci has said 99 years ago on October 29,1923, the Republic of Turkiye was established under the leadership of Gazi Mustafa kemal, after a victorious war of independence.

The ambassador made these remarks on the occasion of the National Day of Turkiye. Defence Minister Khawaja Muhammad Asif, was the chief guest while former Chairman Joint Chiefs of Staff Committee Gen Zubair Mahmood Hayat, Hina Rabbani Khar, Faisal Karim Kundi, Shazain Bugti and others also attended the event.

The ambassador also read out the statement of the President of Turkiye Recep Tayyip Erdogan. The messages reads,” I greet you with my most heartfelt feelings, affection and respect. Today we altogether feel the pride and the enthusiasm of celebrating the 99th anniversary of the foundation of the Republic of Turkiye.

The President message further said,’ we pursue our uninterrupted struggle to elevate the Republic of Turkiye, which we founded by paying heavy scarifies 99 years ago under very difficult conditions, above the level of contemporary civilizations. Thanks to the democracy and development revolutions, which we have achieved in the last 20 years we removed not only the obstacles raised before the national will but also the thick walls placed between the people and the Republic.

We transformed Turkiye into a county with an exemplary democracy an impressive economy, whose diplomacy is followed with interest and which preserves its national unity and brotherhood in the strongest way possible despite all attempts of sabotage.

We strive to set up a peace and prosperity zone around us through our entrepreneurial and humanitarian foreign policy, from ending the humanitarian tragedy in Syria to finding a solution to the Russia-Ukraine crisis. As the country which provides the highest amount of humanitarian aid in proportion to its national income, we run to the rescue of all oppressed, victimized, and needy persons regardless of the origin, belief and differences’.

The musicians from Turkiye presented their mesmerizing performances and received applause from the audiences. The guests were also served with Turkiye delicacies, which they enjoyed the most. It may be mentioned here that the Islamabad Serena Hotel will also organize Turkiye Food Festival thus providing the food lovers with an ample chance of relishing various Turkish delights and delicacies.=DNA