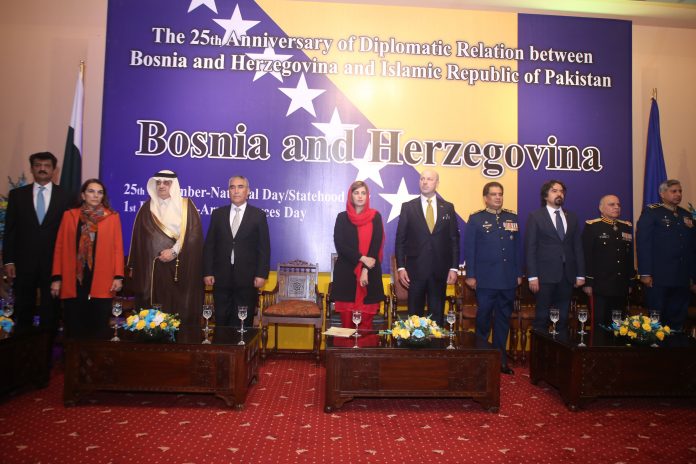 ISLAMABAD, NOV 26 (DNA) – Ambassador of Bosnia and Herzegovina Sakib Foric has said his country greatly values relations with Pakistan adding bilateral ties between the two brotherly countries are constantly on the move in all fields.

He said the friendship between Bosnia and Pakistan is time-tested.

The Bosnian ambassador said this while speaking on the occasion of National Day of Bosnia & Herzegovina. State Minister of Climate Change Zartaj Gul was the chief guest while Governor KPK Shah Farman also attended the event as guest of honour.

Civil and military officers and a large number of members of the diplomatic corps also attended the event.

Ambassador Foric further said Bosnia and Pakistan have been cooperating closely which each other at various forums.

He said military cooperation between the two countries is also strengthening with the each passing day.

The Bosnian ambassador further said Pakistan was among the first countries that recognized Bosnian independence in 1992. Bosnian people are indebted to Pakistan for its support when Bosnia was passing through hard times.

The ambassador hoped relations between the two countries will grow further even in the days to come. The ambassador also gave souvenirs to the chief guest and Governor KPK Shah Farman.

The guests were served the Bosnian and Pakistani cuisiens.=DNA