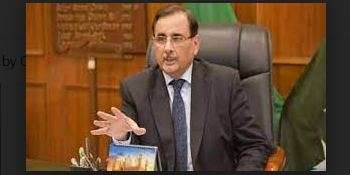 ISLAMABAD, OCT 23 /DNA/ – The Federation of Pakistan Chambers of Commerce & Industry’s Businessmen Panel has described the removal of Pakistan from FATF’s grey list as evidence of sustained and joint efforts of the successive governments, expressing optimism and anticipating the move would drive positive impacts and revival of confidence in the economy despite downgrading of Pakistan by the Fitch and Moody’s Rating agencies.

FPCCI former president and Businessmen Panel (BMP) Chairman Mian Anjum Nisar said though the Fitch and Moody’s have downgraded Pakistan’s Long-Term Foreign-Currency Issuer Default Rating (IDR), flagging country’s worsening liquidity and policy risks but the graduation of the country from the grey list is a big decision, which would help overcome several financial and fiscal challenges, in the longer run in view of crippling trading opportunities to external debt rising. However, coming off the grey-list will not have much impact on foreign direct investment (FDI) and foreign inflows, but would drastically improve the country’s image after the on-site visit of FATF team to Pakistan was reported to be satisfactory, he pointed out.

Mian Anjum Nisar asked the government to take bold steps and austerity measures as the Fitch downgrading reflects further deterioration in Pakistan’s external liquidity and funding conditions, and the decline of foreign exchange reserves. However, we should also acknowledge that after four years, the global anti-money laundering watchdog decided to pull Pakistan out of the ‘increased monitoring list’ after the country completed a 34-point agenda, which seemed to be impossible.

Being on the grey list has had direct ramification on the economic front with different challenges arising for Pakistan, he said and added that FATF has recognized this progress, as its team has verified that reforms are in place, and there is high-level commitment and capacity to sustain these reforms.

The BMP Chairman said that over the last few years, international agencies such as International Monetary Fund (IMF) and World Bank have emphasized on curbing anti-terror financing

He observed that removal from the grey-list would have a huge positive impact for the country, as it carried out a very strict agenda with respect to anti-money laundering and terror financing reforms. The development is good for medium to long term with respect to the perception of Pakistan, which is considered a risky investment. It would help in building the country’s positive image. Down the road, when things begin to normalize on the global front, this would aid in raising international capital and FDI, he said.

He noted that having already suffered direct consequences and economic difficulties from its time on the grey list, the climactic graduation of Pakistan from the grey list will be no less than a breath of fresh air, as it will be a major relief and accomplishment for Pakistan, and is expected to reap benefits in both short and long-run. He was of the view that removal from the grey list will strengthen Pakistan’s position with regards to the soundness of its financial systems and help regain their confidence. The markets are expected to react positively to this news and overall sentiment is likely to remain upbeat for a while, he said. Moreover, going forward, this should also help strengthen Pakistan’s case of re-rating and upgrading by the international credit rating agencies.

He said being on the grey-list was creating a very negative perception among the investment community, which negatively influenced a country’s ability to attract foreign inflows. Now getting out of the grey-list would help in attracting investment. However, this cannot be quantified as global environment does not offer much support at the moment. Thus, no monetary benefits are expected in the near term, but the improvement in perception would be helpful for Pakistan in the long run, he said.

The development will increase confidence, especially for the country’s banking sector, which would also boost the level of business confidence, especially among international investors, bringing Pakistan back into the limelight, he added. He opined that Pakistan never really attracted much Foreign Direct Investment (FDI) even prior to its entry into the FATF grey-list, as this has more to do with government policies and the overall economic situation of a country.

He said that in the short-term, removal from the grey-list would change the sentiment, but would not attract much monetary benefit. The FATF white list does not guarantee instant foreign inflows, but it does offer long-term flows added with some market reforms, he said.

He said Pakistan needs to work on structural reforms to attract investment. While removal from FATF will help, Pakistan’s other major problems in attracting FDI are inconsistent policies, high corporate taxes, unstable rupee, perpetual political instability and above all, utter disregard for commercial contracts.

He referred that Pakistan’s FDI inflows plunged by 47% during the first quarter of this fiscal year. The State Bank of Pakistan (SBP) has reported that Pakistan fetched FDI amounted to $253.4 million during July-Sep of FY23 as against $479.2 million in the same period of last fiscal year (FY22).