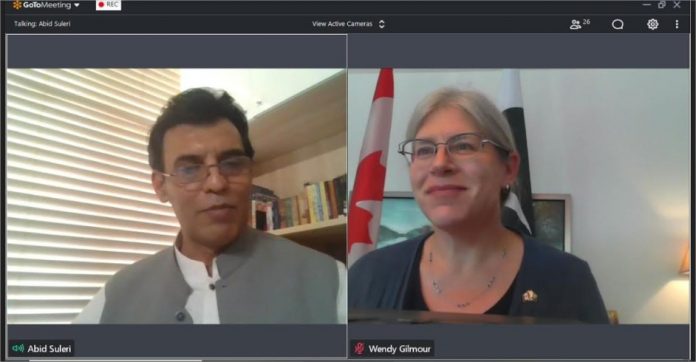 ISLAMABAD, MAY 22 / DNA / =  – Wendy Gilmour, the High Commissioner of Canada in Pakistan has said that the Canadian government highly values the bilateral relationships with Pakistan.

In the aftermath of Covid19, Pakistan is being supported by Canada through a number of measures including direct support to fight the pandemic and by interventions through international support systems and financial institutions. The support that Pakistan has provided to most vulnerable groups of the society under Ehsaas Program has been quite appreciable and crucial step.

Ms Gilmore said this while sharing her mind with audience at online policy dialogue titled ‘Canada-Pakistan relations and cooperation amidst Covid19’ organized by the Sustainable Development Policy Institute (SDPI) here on Friday. A considerable number of audience including the civil society representatives, academicians and researchers made their participation in the webinar.

“Canada has been able to contain the spread of the disease through science-based responses and informed decisions-making,” Ms Glimour said and added further that Canada has a universal public healthcare system that has been crucial to deal with the unprecedented challenge and caters the healthcare needs of all the affected people.

She said that the healthcare in Canada is a provincial responsibility but it’s ensured that all the population has access to similar health facilities. However, the testing is varied in accordance to particular situation of the localities. The response systems in Canada have been already well-established.

Ms Gilmour said that the Canadian government fully understands that the developing countries including Pakistan are facing financial constrains in supporting their populations and saving lives in the face of this global pandemic. Therefore, she said, Canada has played its role at G7 and G20 countries platform in order to provide fiscal space to these countries through the debt relief offers.

She said that the Covid19 is being fought by every country within their borders and with different kinds of situations and the strategies. However, the fact we need to keep in mind is that all the countries of the world are intertwined and therefore, a global response to the pandemic is imperative. A large chunk of the population across the globe cannot maintain social distancing nor are all of the governments able to provide the basic necessities to population in the situations such as lockdown.

However, she said, despite of fiscal constraints, the Government of Pakistan has taken appreciable steps to maintain the balance between the lives and livelihoods. The cash support provided to poorest of the poor under the Ehsaas Program has been a very timely initiative to cater the immediate needs of the families in the need of urgent support.

On the future of bilateral trade and Pakistani exports to Canada, she said that curtailed shipment and ability to move would be the major hindering factor for the time being. However, Canada would continue to enhance mutual trade ties as and when the right solutions would be available. She said that except for this restricted social environment, the policy on migrants wouldn’t be changed.

Dr Abid Qaiyum Suleri, Executive Director SDPI, earlier said that the life in the contemporary world after the arrival of Covid19 has been changed drastically. This fact applies on the bilateral trade relations between the countries as well and therefore, it would be crucial to understand that how the pandemic is going to have impact on Canada-Pakistan mutual trade relations.

Ms Wendy, while responding to questions raised by the participants, said that the Canadian government is taking various measures to reduce the impacts of climate change. She said that the climate change and renewable energy are priority areas for the Canadian government. She also said that we are supporting Pakistan in strengthening the healthcare infrastructure and by provision of medical supplies. Moreover, the support as Covid19 relief through NDMA has also been channelized.

She said that the digitization of the education could be an opportunity as well for the fact that the girls in Pakistan have been facing more hardships while accessing the educational facilities. The Government of Canada is already working in Pakistan to reduce the gender gap and to promote women empowerment through various initiatives, she concluded.