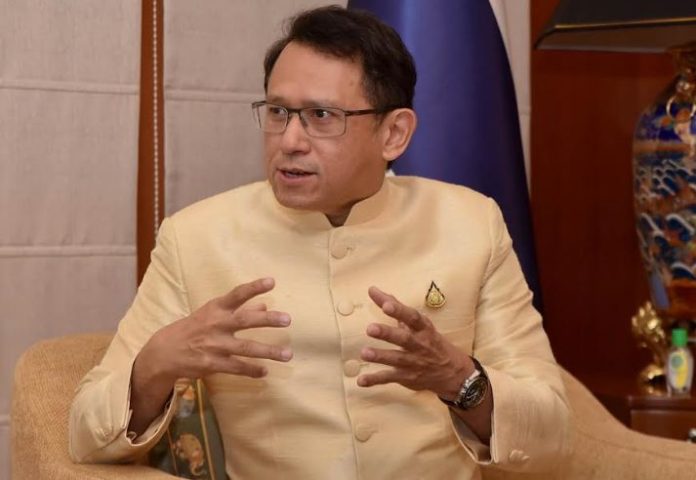 Ambassador of Thailand to Pakistan Chakkrid Krachaiwong talked to Centreline. During the interview the Ambassador touched upon various aspects of bilateral as well multi-lateral issues. Here is the text of his interview.

I am pleased to say that we are living in a very exciting moment of Thailand-Pakistan relations.

The reason I’m saying that is because this year marks the 60th anniversary of the late Bhumibol Adulyadej, the Great and Her Majesty Queen Sirikit’s landmark visit to Pakistan. To commemorate this auspicious occasion, the Royal Thai Embassy, in kind cooperation with the Punjab Governor House, accomplished a project to improve the landscape around the mango trees that Their Majesties planted during their visit in 1962. Sixty years have passed, these old mango trees still stand strong as a testament of our closed and cordial ties. I would like to also express my sincere appreciation to our Pakistani friends who help taking very good care of
these important trees.

His Majesty the current King of Thailand has also visited Pakistan 3 times when His Majesty was the Crown Price. At one of his visits in 2006, the then Crown Prince, brought with him relief assistance granted by his father for the earthquake victims in Pakistan and during the recent severed flood, His Majesty has also sent a Royal Condolence Message to those who were affected by the flood.

Additionally, since October last year, the Embassy along with Pakistanis friends from several sectors as well as the Government of Pakistan have celebrated the 70th anniversary of the establishment of diplomatic relations through numerous activities. In fact, linkages between our two countries actually dated back more than 2,000 years through exchanges of trade and culture since Gandhara civilization. Recently, the Royal Thai Government presented a container of the Lord Buddha’s relics as a gift to commemorate the 70th anniversary to Taxila Museum which combines the beautiful Thai and Gandhara arts reflecting such linkages. Also, under Punjab and Pakistan authorities’ invitation and support, the Thai Buddhists have also performed one of the largest Buddhist ceremonies in Taxila demonstrated Pakistan’s harmony and interfaith principle.

In March this year, H.E. Mr. Don Pramudwinai, Deputy Prime Minister and Minister of Foreign Affairs of Thailand, participated in the OIC Foreign Minister Conference organized in Islamabad. This visit not only demonstrated our cooperation in multilateral aspect but also
to represent Thailand’s strong support to our Pakistani friends as the host country.

In terms of trade, despite of the global pandemic, our trade volume last year has reached the highest record in the entire history of our bilateral trade at 1.8 billion US Dollars. I am hopeful that this year’s bilateral trade would break yet another record as the trade volume until this September has already reached 6 percent higher than the same period of last year. We are also looking forward to the conclusion of Thailand-Pakistan Free Trade Agreement which is anticipated to enhance our trade dynamic and strengthen our trade links to a higher level for our mutual benefit.

When I visited Sialkot, I am delighted to learn that the rubbers and latex that have been imported from Thailand are used by factories there, to make footballs for players around the world especially World Cup during the past several years, including the “Al Rihla football” using in World Cup 2022 in Qatar. The synergy between high-quality rubber from Thailand and skill craftsmanship and technique from Pakistan represents as a symbol of strong relationship between Thailand and Pakistan and cooperation that benefit beyond our two countries.

Regarding investment, Charoen Pokphand Group, Thailand’s agro industry, which has established its large investment in Lahore, has shared with us that they are very pleased with the productivity and already planned to increase their investment next year, creating more jobs for the local people. We also have received good news that Pakistani businessman who joined Rawalpindi Chamber of Commerce’s trip to Thailand in July has invested in buying two hotels in Phuket, Thailand. I still believe that there are more rooms to be explored.

2) Direct air links between the two countries have contributed greatly towards deepening of bilateral ties. Bangkok can also be a transit hub for rest of the world. Please share your thoughts on this?

One of the first questions I was asked since my arrival last year was “When Thai Airways will resume its flight between Pakistan and Thailand?”.  Since then, the Royal Thai Embassy in Islamabad had been working closely with the Thai Airways toward the flight resumption. Finally in March this year, the Thai Airways has resumed its direct flights from Bangkok to all three major cities in Pakistan: Islamabad, Lahore, and Karachi. Not only that, the number of flights has quickly increased from only once a week to 4 or 5 times a week. Not only Pakistanis can travel to Thailand more comfortably but also, for the last couple of months, we have noticed a sharp increase in numbers of Thai people travelling to Pakistan, deepening the people-to-people ties, which is another important element of our bilateral relations. Recently, we have seen more and more stories about Pakistan published in the Thai social media, including one of my own, sharing the true beauty of natural landscape and world ancient heritage sites which have not presented well enough through the eyes of the global media.

3) Cultural linkages are yet another area where both countries have been cooperating closely. How do you see Pakistan government arrangements to preserve especially the Buddhist heritage?

I believe that culture, arts, music, dance, and food can be key elements to create understanding and unity as they are understandable and appreciable by all humanity. It is a common language of all man kinds. That is why for the past year the Embassy has participated in several culture and social activities from fund raising bazar with MOFA to traditional dress show to Thai Festival in Lahore, the largest scale event from Thailand which attracted almost 10,000 visitors.

Regarding the heritage sites, Pakistan is home to the ancient Gandhara civilisation with plenty of ancient Buddhist sites declared as UNESCO World Heritage. I admire the arrangement of the Pakistan’s authorities as well as the local Pakistanis in preserving these world heritage sites. By doing so, not only the Pakistanis have preserved these sites for your country but also for the people from around the world. The Pakistan Government’s vision to promote the tourism of these historical sites will bring more development to these areas and the local people and economy would also benefit greatly from this tourism.

I would like to see more people visiting Pakistan because I want them not only to see your country’s beauty and heritage but to also experience, as I do, the friendliness and kindness of the Pakistanis.

4) Inspired by Pakistani truck art; the Royal Thai Embassy recently got its wall painted,
an idea which was liked by many Pakistanis and other foreign mission as well. What was your motivation behind this initiative?

The 226-foot-long wall of the Embassy, which was painted with the Pakistan’s truck art, is
one of the projects to celebrate the 70th anniversary of the establishment of Thailand-Pakistan diplomatic relations.

I would like to express my appreciation to the very talented artist, Mr. Siyar Khan, from Peshawar who has preserved this indigenous art for over 20 years of his work. We hope that this painting will contribute to the promotion and preservation of indigenous art, which has long history, in this digitalized era. I also would like to thank the Pakistan’s media that help promoting this project to wider audiences. I am very pleased the Thai media are also interested in and published a number of articles on this project, one of which is written by myself.

5) Thailand as we know contributed generously towards flood relief activities. Please share with our readers some details about the assistance provided so far including a gala fundraiser held in collaboration with the Serena Hotels?

I wish to express my sincere condolences and pass on solidarity from the people of Thailand to those who have been affected by one of the most devastating floods in the Pakistan’s history.

The Ministry of Foreign Affairs of Thailand, the Royal Thai Embassy, and Thai civil society organizations contributed approximately 134 million Pakistan Rupees for the flood relief operations.  Moreover, I also have a conversation with Mr. Aziz Boolani, CEO of Serena Hotel, and we agreed to have professional Thai traditional dancers and Muay Thai boxers who flew in from Thailand to perform at the Fundraising Gala Dinner both in Islamabad and Faisalabad to assist those who suffered from the severed flood. We are proud to be a crucial part of these fundraising galas and are appreciative of Serena Hotel and the donors as well as participants of the events.

Currently, the Thai civil society still continues its financial support to the flood victims because we understand that even if the flood has been subsided in many areas, the rehabilitation of the flood affected people still be a priority.

I believe that it is important for the international community to focus much more on combating climate change and global warming. Otherwise, this can happen again and it could happen to any country.

I extremely value my assignment here as Ambassador because it allows me to meet Pakistani friends from all walks of life as well as my friends in Diplomatic Circle. It has also given me profound respect for the people of Pakistan and their patriotic minds and passionate hearts as Pakistan progresses through this challenging world. My Ambassadorship is also giving a great opportunity for me and our families at the Embassy, to return your kind hospitality, with our sincere friendship to our dear friends in Pakistan. Rest assured that, as a friend, Thailand will work hand in hand with Pakistan to achieve our common goals for the benefits of our peoples
as well as people of the world.