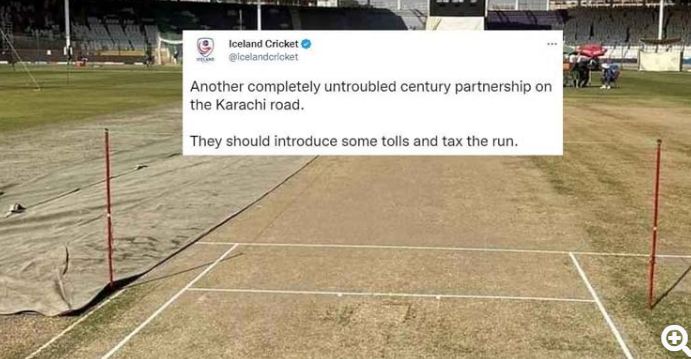 KARACHI, JAN 2: Pakistan is currently hosting a two-match Test series against New Zealand. The first match ended in a draw and now both teams are locking horns in the second Test at the National Stadium in Karachi. New Zealand captain Tim Southee won the toss and decided to bat first. The pair of Devon Conway and Tom Latham started the proceedings for the visitors. Both the left-handed batters carried their good form into the second Test and gave their team a perfect start. Both Latham and Conway scored half-centuries and also stitched a century opening partnership.

Soon after the match started, the Twitterati was not far behind in raising the issue on social media, as even Iceland Cricket joined in with a brutal dig of their own.

“Another completely untroubled century partnership on the Karachi road. They should introduce some tolls and tax the run.” Iceland Cricket wrote on Twitter.Kiwi player Mitchell McClenaghan made fun of the pitch. He tweeted the photo of the Karachi pitch and he termed it as the road. He tweeted, “What an amazing road, a batsman’s dream.” This tweet of McClenaghan has gone viral on social media.