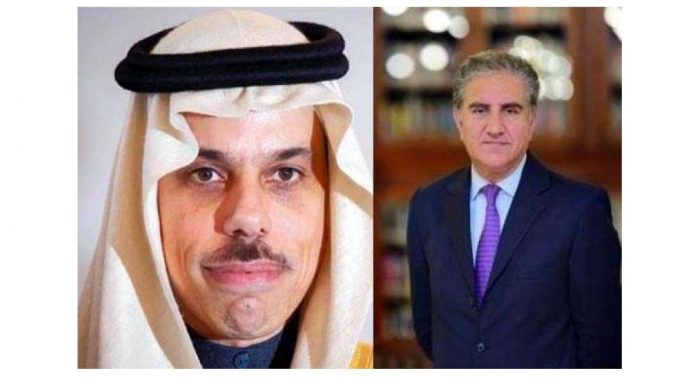 Expressing deep condolences on the loss of life due to the outbreak of Covid-19, the Foreign Minister commended the steps taken by the Kingdom of Saudi Arabia in arresting the spread of the virus. The Foreign Minister also briefed Prince Faisal bin Farhan on the measures being taken by Pakistan to contain coronavirus.

The Foreign Minister felicitated his Saudi counterpart on the successful initiative of convening the Virtual G-20 Leaders’ Summit, and stated that Saudi leadership of the G-20 was key to forging a coordinated and coherent global response to the crisis.

In this context, the Foreign Minister also highlighted Prime Minister Imran Khan’s call for debt relief and restructuring for developing States to enable them to free up resources to combat the disease, save precious lives, and shore up economies.

Foreign Minister Qureshi reiterated Pakistan’s strong condemnation of the recent missile attacks launched towards Riyadh and Jazan, noting that the timely action of Saudi Defence Forces had helped save lives. He also reaffirmed Pakistan’s full solidarity with the brotherly people of Saudi Arabia and support for the security and territorial integrity of KSA.

Foreign Minister Prince Faisal thanked the Foreign Minister for his call in the context of Covid-19 and underlined that the steps taken by KSA to stem the outbreak were essential for saving lives. He also expressed appreciation for Pakistan’s principled stance on the missile attacks and highlighted the steps taken by the Kingdom of Saudi Arabia to counter such attacks.

The Saudi Foreign Minister also thanked the Foreign Minister for his felicitations on successful convening of Virtual G20 Leaders’ Conference and affirmed that a number of measures, including the proposal for debt re-structuring, were deliberated upon during the Conference to help tackle the economic consequences of Covid-19.

The two Foreign Ministers underscored the importance of collaborative endeavors to deal with the situation and agreed to stay closely engaged. DNA