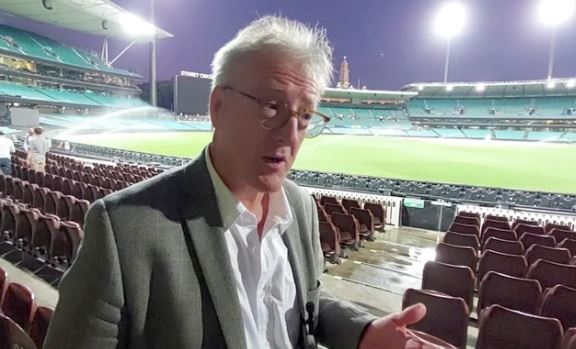 SYDNEY: Former head coach of the Pakistan cricket team Geoff Lawson feels that the Men In Green were lucky to get through the semi-finals but now they are capable of winning the T20 World Cup.

In an exclusive interview with Geo News on Wednesday, the 64-year-old said that Pakistan should play without fear of consequences in the semi-final against New Zealand.

“Predictable in the unpredictability as ever,” the former Australian cricketer said while talking about Pakistan’s journey in the tournament.

“And, lucky to get through the semi-finals. We know that they can be brilliant on their day. And I think the bowling has been fairly brilliant. The batting just let them down a little bit bought,”

“Now, through to the semi-finals, they’re certainly capable of winning this cup,” said Lawson who has represented Australia in 46 Tests and 79 ODIs.

The former coach added that the great paradox about Pakistani players is that sometimes they can look so controlled when they’re under pressure.

“I think that’s one of the big advantages for Pakistan that there is scraped in, there’s no pressure on them because they weren’t expected to be there,” he said while advising Pakistan to play its natural game without fear of consequences.

Advice ahead of the semi-final

When asked what would he advise the Pakistan team ahead of the semi-final against New Zealand, the former cricketer said that it’s about being relaxed.

“The SCG will have plenty of pace in it. I know it’s got a reputation for spinning but it’ll be fast and back those opening bowlers. Get fast bowlers and try to dominate the game with your bowlers,” he added.

Replying to a question, Lawson said Pakistan’s opening pair — Babar Azam and Mohammad Rizwan — are top players and they have won several games for Pakistan.

He added that it’s been a bit of a surprise that the Babar doesn’t seem to be hitting the ball that well.

“And, maybe it is just the stress of the tournament. It’s trying to make it to the semi-finals and all that pressure of expectation that you should be in the semi-finals. Hopefully now having got through that, that expectation, he can just relax,” he said.

He agreed that being captain in Pakistan is not an easy task and captains in Pakistan are always under pressure.

“Captains have always felt the weight of the nation on their shoulders, particularly when they’re playing big games against Australia or India, perhaps. And yes, there is that pressure there. And it’s a difficult thing to overcome,” Lawson said.

“When I was the coach there, listen, we had a young captain, we had Shoaib Malik, who was brought in as the captain, he was very inexperienced, and we tried to use that inexperience saying don’t worry about it. People aren’t expecting you to be fantastic, because you’re just a young man. And maybe that’s what Babar has got to do as well. Just put all that to one side of play,” he added.