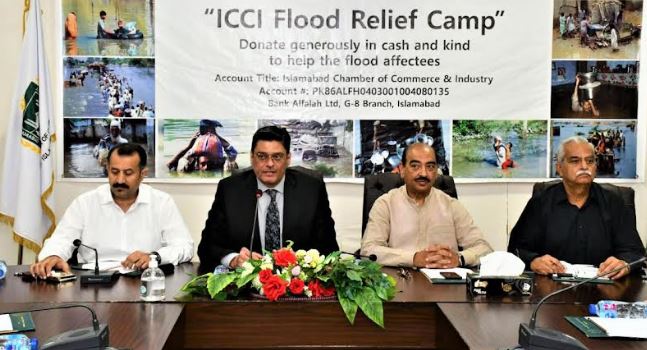 Islamabad, SEP 2 /DNA/ – The Islamabad Chamber of Commerce & Industry (ICCI) has set up a Flood Relief Camp to collect donations in cash and kind from the members of the business community that would be delivered to the flood affectees. ICCI has opened a new bank Account No.PK86ALFH0403001004080135 in Bank Al Falah, G-8 Branch, Islamabad in which the members of business community can deposit their cash donations for the flood affectees. Khalid Iqbal Malik, Tariq Sadiq, Zubair Ahmed Malik, Muhammad Ejaz Abbasi, Baser Daud, Sheikh Amir Waheed former Presidents, Ejaz Mussarat Khan Chairman Federation of Realtors Association, Azhar ul Islam Zafar, Akhtar Hussain, Ahsan Zafar Bakhtawari, Hafiz Bilal Munir, Ch. Ashraf Farzand, Khalid Mehmood and others were present at the occasion. The participants announced cash donations for the flood affectees and assured that they would continue to cooperate with ICCI Flood Relief Camp.

Speaking at the occasion, Muhammad Shakeel Munir, President, Islamabad Chamber of Commerce & Industry said that it is a noble cause to provide maximum relief to the flood affectees and everyone fully support such efforts. He said that a Committee has been constituted under the supervision of Muhammad Faheem Khan Vice President ICCI to form teams that would identify the areas in cooperation with organizations already working in the field and would go to the identified areas to deliver the relief goods in person to the deserving persons in a transparent manner. He said that the recent flash floods have caused massive destruction in Pakistan as according to official data 110 districts in the country have been badly affected. He said that around 1200 people have lost their lives in floods, 45 percent of the cropland area of the country has been washed away and the country has suffered an economic loss of around USD 10 billion as per early estimates, which showed the devastating impact of these flash floods. He appealed to the business community to come forward and extend maximum support in cash and kind to ICCI Flood Relief Camp so that relief could be provided to the flood affectees.

Jamshaid Akhtar Sheikh, Senior Vice President and Muhammad Faheem Khan, Vice President ICCI said that the reconstruction of houses of flood victims would take a long time and the business community should be ready for long-term cooperation for their rehabilitation. Muhammad Faheem Khan also briefed the participants about the method that would be adopted to deliver the relief goods to the deserving flood affectees.