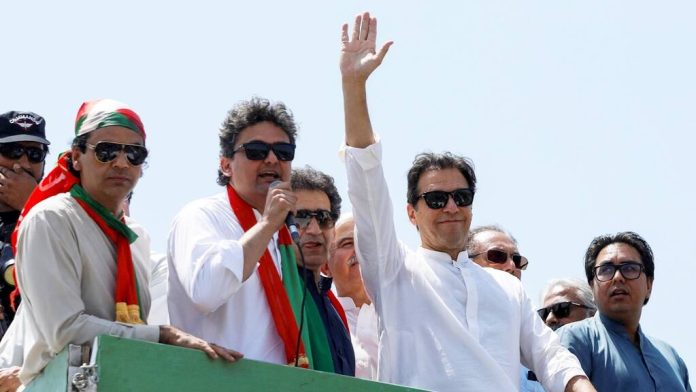 ISLAMABAD: /DNA/ – Pakistan Tehreeke-e-Insaf (PTI) Chairman Imran Khan announced that he would lead Islamabad protest at Parade Ground on July 2 against the imported government imposed on Pakistan through US regime change conspiracy.The PTI high-level political committee meeting was held here on Saturday with Imran Khan in the chair; wherein the overall country’s political situation, back-breaking inflation and future course of action of the party were threadbare.The meeting was attended by Central Secretary General Asad Umar, PTI KP President Pervez Khattak, Asad Qaiser and Aamir Mehmood Kiyani along with others central and regional leadership.During the meeting, they condemned in the strongest terms the worst lawlessness witnessed during the first phase of local body elections in Sindh.They also expressed deep concerns over the Election Commission of Pakistan’s (ECP) failure to hold fair, transparent and credible elections.The participants showed great reservations over the rising complaints of pre-polls rigging by the coalition government in 20 constituencies of Punjab, where by-polls were scheduled on July 17.They said that enthusiasm among the people regarding the by-elections was a ray of hope, as the imported government’s days were numbered.During the meeting, a briefing was given pertaining to the preparations for the grand protest rally to be held on July 2 at the Parade Ground in Islamabad.PTI Rawalpindi and Islamabad organisations were issued special instructions to speed up their preparations and public mobilization campaigns to make the rally a historic.They reviewed the imported government preparations for the passage of the budget and spiraling prices that’s crushing the nation.During the meeting, the participants expressed happiness and satisfaction over the decisive victory of PTI in PK-7 Swat, wherein PTI inflicted punching defeat on ANP candidate backed by 13 political parties.Speaking on the occasion, Chairman PTI said that he would lead the July 2 Rawalpindi-Islamabad protest rally, adding that strong anti-government movement was inevitable as these inept, imported and notorious government of criminals were imposed on the nation.Imran Khan said that people from all walks of life especially the youth and women were political more matured now as it was clearly evident from the strong and overwhelming reaction from conscious people over the ousting of the elected government through foreign conspiracy. He said that the local Mir Jafars were flouting constitution and law and democratic values more ruthlessly than dictators.The PTI chairman stated that governments of thieves in Sindh and Punjab were busy in steeling elections but ECP remained unmoved and was just looking the situation as a silent spectator.“The whole democratic system was put at stake in order to impose these slaves on the nation, who gave themselves NRO-2 to save their Rs. 1,100 billion corruption,” Imran Khan maintained. However, he added that the nation rejected NRO-2 for thieves who made lives of the miserable due to back-breaking inflation.He said that only a peaceful democratic movement for true freedom could get the nation out of the quagmire in which they have been plunged by these salves.