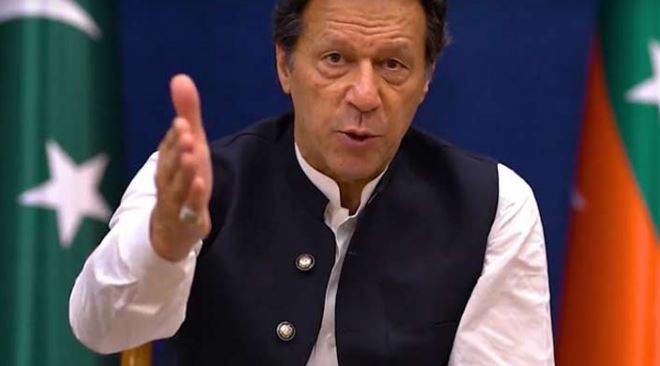 ISLAMABAD: PTI Chairman Imran Khan on Monday urged Chief Election Commissioner (CEC) Sikander Sultan Raja to resign, claiming that his party won the Punjab by-polls despite the use of state machinery in PML-N’s favour as he insisted that early elections were still the only solution to the country’s woes.

In an address today after his party’s triumph in the Punjab by-elections, he thanked youngsters and women who came out in large numbers to vote for PTI.

“I believe this is the moment in the history of Pakistan that we should be thankful for because the nation has awakened,” Imran remarked. “People have finally understood the ideology of Pakistan.”

The ex-premier, however, stressed that Pakistan was facing an economic crisis that was fueled by the political mess in the country.

“Our reserves have shrunk by half since PML-N came to power. Despite the agreement with IMF (International Monetary Fund) in sight, our rupee is declining.”

He highlighted that amid these crises, the only way out was free and fair elections. But, Imran contended, those elections should not be conducted the way by-elections in Punjab were held.

“[During the by-polls] they used all the tactics to defeat us. Police threatened our people. Officers acted as workers of PML-N,” he claimed, adding that Punjab Chief Minister Hamza Shehbaz had no right to use the police in such a way.

He also claimed that there were four million deceased voters included in the electoral rolls.

Separately, Imran claimed that the CEC tried his best to turn the polls in favour of the PML-N.

“I am disappointed in the chief election commissioner. How could he let all this happen? He is not competent to run [the Election Commission of Pakistan] and is biased towards a political party. Raja should immediately resign.”

He said that his party did not trust the CEC, citing the example of Senate elections in 2021 in which Imran said evidence of bribery was seen.

“In Sindh’s LG (local government) elections, 15 per cent of PPP candidates won unopposed, yet nobody investigated it,” he recalled. “During the Daska polls, the returning officer opened all the votes against PTI. He made us lose that election.”

He said that despite several cases of rigging during polls being brought before the CEC, he never punished anyone, which encouraged malpractice as no one feared accountability.

But, despite all these tactics, Imran said: “We won as people came out to cast their votes like never before.