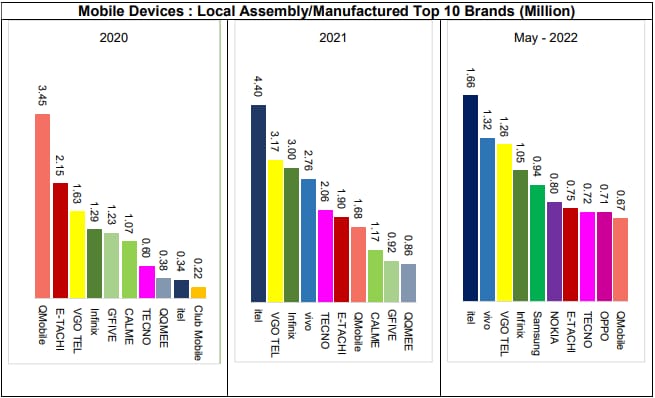 ISLAMABAD, : While saving precious forex reserves for Pakistan, the production of local and foreign mobile companies has not only outnumbered imports of mobile devices, but also created more than 22,000 jobs for the local population, Gwadar Pro reported on Thursday.

According to Pakistan Telecommunication Authority (PTA), between January and May 2022, at least 12.41 million mobile phones were assembled/manufactured in Pakistan, while only 0.94 million devices were imported. Out of them, 5.42 million are smartphones while 6.99 million are 2G phones.

Device Identification, Registration and Blocking System (DIRBS) has created a level playing field for all entities in Pakistan, resulting in the establishment of local assembly plants.

In view of the successful development of this industry, PTA issued Mobile Device Management (MDM) Regulations, 2021, in accordance with the Mobile Manufacturing Policy issued by GoP in June 2020. The policy offers incentives including tax exemptions, etc., for all entities that establish manufacturing plants in Pakistan.

According to Pakistan Economic Survey (PES) 2021-22, mobile manufacturing companies have created around 22,000 jobs for the local population.

Pakistan has also started exporting “made-in-Pakistan” mobile phones to foreign countries; if the exports grow at a steady speed, it will help the country to overcome its trade deficit.