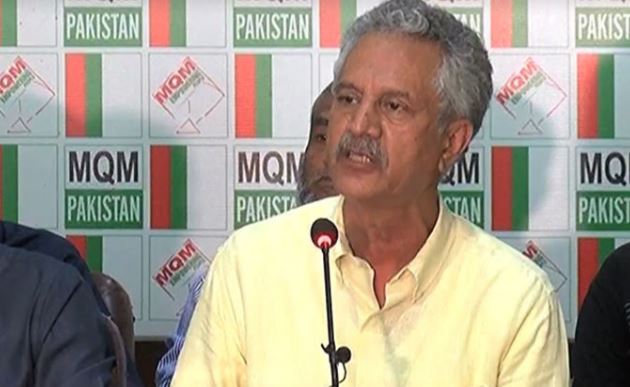 KARACHI – Muttahida Qaumi Movement Pakistan (MQM-P) leader Waseem Akhtar has lashed out at the Sindh government for inadequate arrangements as the monsoon rains inundated several parts of the metropolis.

Addressing a press conference, former mayor Karachi said the government officials have gone to interior Sindh for celebrating Eidul Azha with families. This is what happens when people are hired on fake domiciles and locals are denied jobs, he added.

Where are the officials of Sindh Waste Management Board (SWMB)? Why didn’t the nullahs [of Karachi] were not cleaned a month earlier, he asked

He added that Karachi is being run through deputy commissioners and complained that the Sindh government did not devolve powers to local bodies and said the situation would be different if it had been done.

He decried nothing was done for the metropolis despite record tax collection, adding that the people lost lives and their properties were damaged.

Akhtar said the people of Karachi are asking why their tax money is not spent on them, adding that the city already did not have an infrastructure and what was left was destroyed in recent rains.