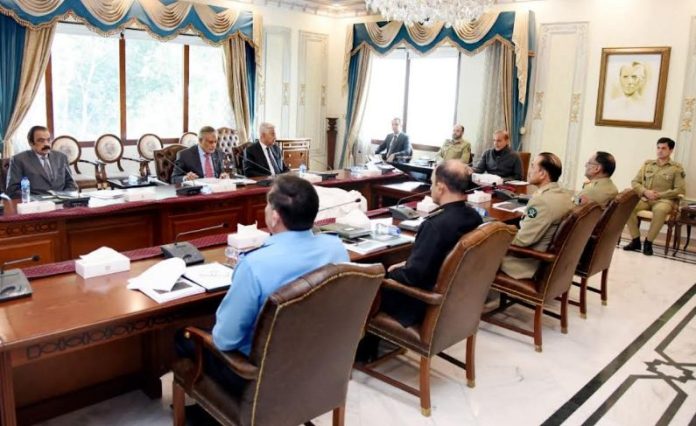 ISLAMABAD, JAN 2: /DNA/ – The National Security Committee on Monday reiterated its resolve to have zero tolerance for terrorism in Pakistan and reaffirmed its determination to take on any and all entities that resort to violence.“This will be dealt with full force of the state. Pakistan’s security is uncompromisable and the full writ of the state will be maintained on every inch of Pakistan’s territory,” the Committee resolved, according to a press release issued after the meeting concluded. The 40th meeting of the National Security Committee, chaired by Prime Minister Shehbaz Sharif, was attended by relevant federal cabinet members, Chairman Joint Chiefs of Staff Committee, all services chiefs, and heads of intelligence services. The forum was apprised of the security situation of the country with a particular focus on recent terrorist incidents in Khyber Pakhtunkhwa and Balochistan. The prime minister emphasized that the war against terrorism would be led by federal and provincial governments as per National Action Plan in accordance with National Internal Security Policy with people-centric socio-economic development as a priority while the armed forces would provide resolute deterrence and secure conducive and enabling environment. He said the provincial apex committees were being revived in full earnest and law enforcement agencies especially the counter-terrorism departments would be brought up to the required fighting standards with requisite capabilities. The forum concluded that no country would be allowed to provide sanctuaries and facilitation to terrorists and Pakistan reserved all rights in that respect to safeguarding its people. The Committee underscored that comprehensive ‘National Security’ revolved around economic security and that sovereignty or dignity came under stress without self-sufficiency and economic independence. The forum undertook a comprehensive view of the ongoing economic situation vis-à-vis challenges being faced by the common people of Pakistan, particularly the lower and middle-income classes.