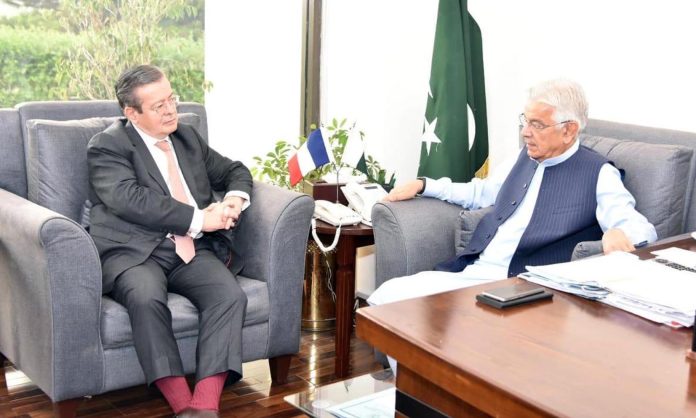 ISLAMABAD, Minister for Defence Khawaja Muhammad Asif on Friday was called on by Ambassador of France Nicolas Galey, as the minister attached great importance to Islamabad relations with France both bilaterally and in the context of European Union.

The defence minister further highlighted that Pak-France bilateral relations were based on principles of mutual respect, said a news release.

Minister for Defence stressed that Pakistan was committed to stability and peace in the region with particular focus on its relations with Afghanistan and India.

He reiterated that Kashmir dispute resolution was necessary for lasting peace in the region.

Khawaja Muhammad Asif said that Pakistan would continue to work closely with France on all matters of bilateral interest.

He also stated that the collaboration in addressing global challenges, such as terrorism, extremism was important part of our bilateral relations.

The minister highlighted that Pakistan strongly condemned terrorism in all its forms and manifestations.

The visiting dignitary appreciated Pakistan’s role in regional stability and ensured to play his role for further improvement in diplomatic cooperation with Pakistan at all levels.