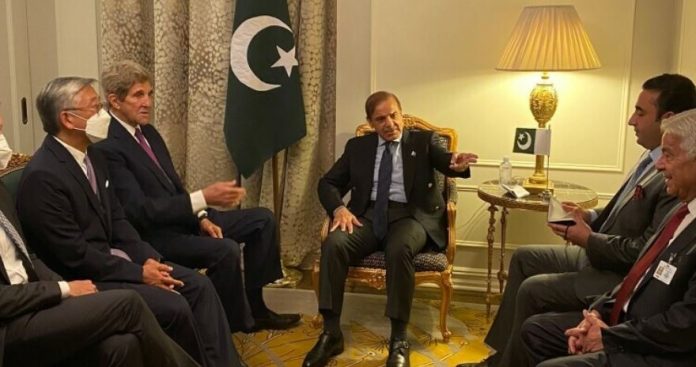 New York: Prime Minister Shehbaz Sharif, during his meetings with world leaders on the sidelines of the 77th session of the United National General Assembly (UNGA) in New York, apprised them of the flood crisis in Pakistan, it emerged on Wednesday.

The premier highlighted the need for collective action to deal with climate change. “I also told them that Pakistan is keen to build partnerships in the realms of trader and economy,” he said in a tweet. Among the leaders the prime minister met was US Special Envoy for Climate Change John Kerry.

The two leaders discussed the devastating floods in Pakistan, the $55 million provided by the US in assistance so far, and the “urgent need to work together” to fight the climate crisis and prevent future tragedies, Kerry said in a tweet.

“My heart goes out to the affected communities and the Pakistani people,” he added. The prime minister also met International Monetary Fund Managing Director Kristalina Georgieva who expressed deep sympathy for Pakistan and its people.

“The IMF will continue to support Pakistan under the current program to help ease the pain of the Pakistani people,” Georgieva said in a tweet.

Later in the day, PM Shehbaz held a meeting with World Bank President David Malpass and told him about the climate crises in Pakistan.