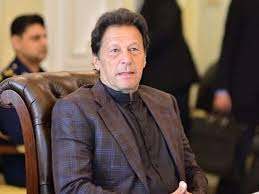 ISLAMABAD: Prime Minister Imran Khan has expressed the determination to continue his struggle for rule of law and purging the country of corruption.

Addressing the nation on Radio and Television, he described the opposition parties’ use of undemocratic tactics to get Syed Yusuf Raza Gillani elected on a Senate seat in a move to pressurize him.

The Prime Minister announced that he is going to take a vote of confidence from the National Assembly tomorrow.

He said as voting on the confidence motion will be open, even the Members belonging to the Pakistan Tehreek-e-Insaf can vote against him and if they do not support him, he will go to the opposition benches.

Imran Khan expressed his conviction that Pakistan is bound to emerge as a great nation in accordance with the dreams of its founding fathers.

He said if there was an open ballot, the PTI’s candidate would have been elected on general seat from the Federal Capital.

Imran Khan regretted that despite agreeing on the holding of Senate elections through open ballot in the Charter of Democracy, Pakistan Peoples Party and the Pakistan Muslim League-Nawaz opposed the idea to pave the way for corruption.

The Prime Minister also regretted that the Election Commission of Pakistan, which was responsible for transparent Senate elections, also favoured secret ballot during the Supreme Court proceedings.

He said the corrupt leaders made billions of rupees through commissions and kickbacks in major power and other development projects, and stashed the same abroad, putting the country under heavy debt.