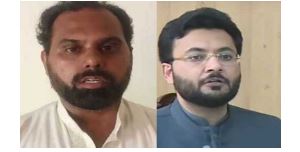 LAHORE – The alleged WhatsApp conversation of Pakistan Tehreek-e-Insaf (PTI) leader and former Federal Minister Farrukh Habib leaked with a person taken into custody by the police from PP-168 along with hundreds of identity cards ahead of the by-election in PP-168.

Farrukh Habib sent a WhatsApp message to accused Khalid Sindhu in June and according to the WhatsApp chat, Farrukh Habib called the accused to his house.

The accused said that he had bought 7 thousand votes till last night.

In a special conversation with Dunya News, Farrukh Habib denied the allegations and said that there is no truth in these allegations, it was a drama created by the PML-N and opponents  adding that he talks to hundreds of people every day.

‘We do not have illegal money to buy votes and we did not give any instructions to anyone, I was told that PML-N people want to sell their votes but I refused them that we do not need such votes,” PTI leader Hafiz Farhat said during conversation with Dunya News.

Meanwhile, the Election Commission of Pakistan took notice of the alleged conversation of the detained person with Farrukh Habib and sought a report from the District Monitoring Officer.

The spokesperson of ECP said that action will be taken after receiving the report.