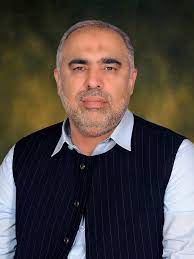 The NA speaker was heading a nine-member parliamentary delegation to Kabul on the special invitation of his counterpart Chairman Wolsi Jirga Afghanistan, Mir Rehman Rahmani.

The aircraft of the speaker was denied permission to land at the Hamid Karzai International airport “due to a security threat”, said Sadiq.

He said “the plane was about to descend when the control tower informed of the closure of the airport. New dates for the visit will be decided after mutual consultations.”

According to the data available from the flight tracker Flightradar 24 and shared by an unofficial PIA enthusiast the aircraft circled for some time near Kabul’s Hamid Karzai airport, before heading back home.

However, the information available from the Kabul Airport’s online arrivals and departures showed regular flight movement.

Chairman Wolsi Jirga Afghanistan Mir Rehman Rahmani and Chairman of the Afghan Senate Fazal Hadi Muslimyar telephoned Speaker National Assembly Asad Qaiser and regretted the postponement of the visit. They said they were looking forward to the visit of the delegation from Pakistan at an earlier date.

Speaker Asad Qaiser said he would be visiting Kabul as soon as the security situation improves.