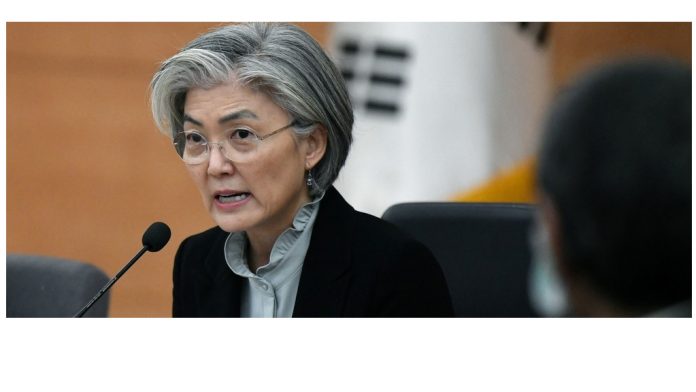 “It doesn’t matter that my country is stabilizing and coming to grips with this,” says South Korean Foreign Minister Kang Kyung-wha, explaining the approach her country has taken to the coronavirus outbreak at a virtual World Economic Forum COVID Task Force meeting. “The world must overcome this together.”

Since its first confirmed case of COVID-19 in late January, South Korea has shown a determination in the face of the virus that appears to be paying off. From a sudden spike in the number of cases to its decision to implement widespread testing, South Korea has shown itself able to respond quickly and decisively.

“We acted early. But much of it surprised us – especially how fast it moves,” the Foreign Minister explains. The first 30 cases identified in South Korea were handled in a steady and diligent manner. But that all changed with the appearance of Patient 31.

“After that, it just exploded. Containing the spread became difficult. Our sense of crisis at that time was like the sense of crisis in many European countries who are fighting the infection today – a feeling of being overwhelmed.”

Between 19 January and 18 February, South Korea had recorded a total of 30 cases and no deaths. That slow increase in infections soon changed – 18 February was the day it recorded its 31st case. Within 10 days, there were more than 2,300 cases.

Patient 31 was what is known as a super-spreader – someone who passes the infection on to a larger number of people.

In the days before her diagnosis, she travelled to crowded spots in the city of Daegu and the capital, Seoul. She was then involved in a minor traffic accident and checked into hospital, and while a patient there she attended church services on two occasions and went for lunch in a hotel with a friend, despite developing a fever. In just a few days after she was diagnosed with the coronavirus, hundreds of people at the church she had attended and in the surrounding areas tested positive.

Super-spreaders like Patient 31 enable a virus to take hold and act as fuel for an outbreak.

Although the rapidity with which COVID-19 took hold in South Korea initially surprised authorities, well-established strategies were soon put into place.

“But you need to plan and to stay one step ahead,” says Foreign Minister Kang. “We took an all-government approach. The Prime Minister created a task force of all government ministries and, crucially, all regional and city governments, too – we are a very devolved democracy.”

This joined-up strategy, involving the different regional authorities around the country soon paid off.

“When one region ran out of hospital beds we asked other provinces to open up beds in their hospitals. When it ran out of doctors we asked doctors in other regions to help,” she continues.

Foreign Minister Kang also explains that being open with people and securing their trust is vitally important. “The key to our success has been absolute transparency with the public – sharing every detail of how this virus is evolving, how it is spreading and what the government is doing about it, warts and all.”

In 2015, the country experienced a sudden and unexpected outbreak of MERS – Middle East Respiratory Syndrome, which is also caused by a coronavirus. It was the largest MERS outbreak outside of the Middle East, and led to 185 confirmed cases in South Korea. It also led to a firm belief that testing should form a central part of any response to a viral epidemic.

So when COVID-19 hit South Korea, testing became the course of action that seems to have set the country apart from other nations.

“Testing is absolutely critical with a fast-travelling virus like this,” says Kang. “We have tested over 350,000 cases so far – some patients are tested many times before they are released, so we can say they are fully cured. Altogether, we’re talking about one out of 145 or one out of 150 people having been tested so far.”

Unlike Italy, China, the UK and parts of the US, there was no lockdown in South Korea. It did, however, close its schools. There have been postponed attempts at reopening them, but reopen they must, according to Foreign Minister Kang.

“We aim to open our schools on 6 April – the right to an education is a crucial part of our social values. We’ve postponed school openings twice, now we’re saying we can’t deprive our children of their right to learn. That means we have to do everything in the next two weeks to maintain the spread at a manageable level.”

Despite that optimistic and determined message, she also sounds a note of caution. Beating the outbreak does not mean the coronavirus no longer poses a threat, she says.

“Even with schools opening, we realize it’s not going to be normal like things were before the coronavirus. Normal after the virus is going to look very different. This will be with us for a long time. So we all need to find a way to manage it at a status quo level.”