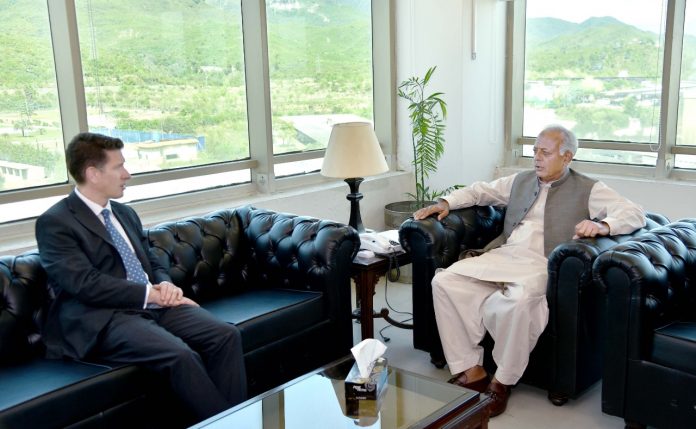 ISLAMABAD, APR 10 (DNA) – British High Commissioner to Pakistan Dr. Christian Turner CMG has stated that the two countries have immense trade potential which should be fulfilled in order to further strengthen bilateral ties.

He said this during his meeting with  Aviation Minister Ghulam Sarwar.

The minister.reaffirmed Pakistan’s commitment towards enhancing aviation operations with the United Kingdom and assured the British High Commissioner of his full support in accommodating all of the stranded UK nationals in Pakistan.

The Aviation Minister highlighted the strong relationship and the long history between Pakistan and the United Kingdom.

He inquired about the health of Prime Minister of the United Kingdom Mr. Boris Johnson and conveyed his best wishes for his speedy recovery. British High Commissioner to Pakistan Dr. Christian Turner CMG thanked the Aviation Minister for his efforts to evacuate 2,000 stranded UK nationals back to their country.

He stated that the two countries should enhance mutually beneficial collaboration in the time of Corona Virus. =DNA