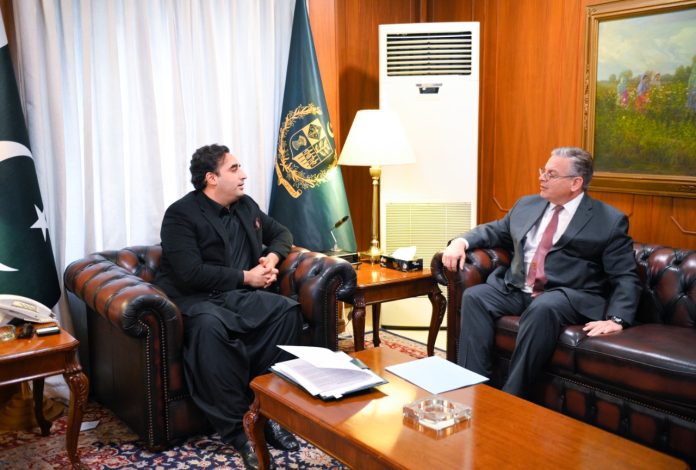 ISLAMABAD, JAN 12 (DNA) — The US Ambassador to Pakistan Donald Blome on Thursday called on Foreign Minister Bilawal Bhutto Zardari to discuss the flood situation in the country.

The meeting underscored the concerns of the flood-stricken people, and in this regard, Mr Bhutto-Zardari appreciated the US announcement of an additional $100 million for the rehabilitation of the flood-hit people.

During the meeting, visa interview facilities for Pakistanis were also discussed. In this regard, Mr. Bhutto-Zardari said he had a detailed discussion with the US foreign minister regarding visa facilities, adding that this initiative will not only speed up the process of taking visas but also enhance public communication.

In the meeting, Mr Blome reiterated his commitment to continue supporting the Pakistani people for the rehabilitation of the flood-stricken people. Earlier today, Chinese Ambassador to Pakistan Nong Rong paid a farewell call on Foreign Minister Bilawal Bhutto Zardari in Islamabad.

During the meeting, views were exchanged on bilateral relations and ways to enhance cooperation in various sectors, including the China-Pakistan Economic Corridor (CPEC). Mr Bhutto-Zardari thanked the outgoing Chinese Ambassador for his service and wished him well in his future endeavors. = DNA