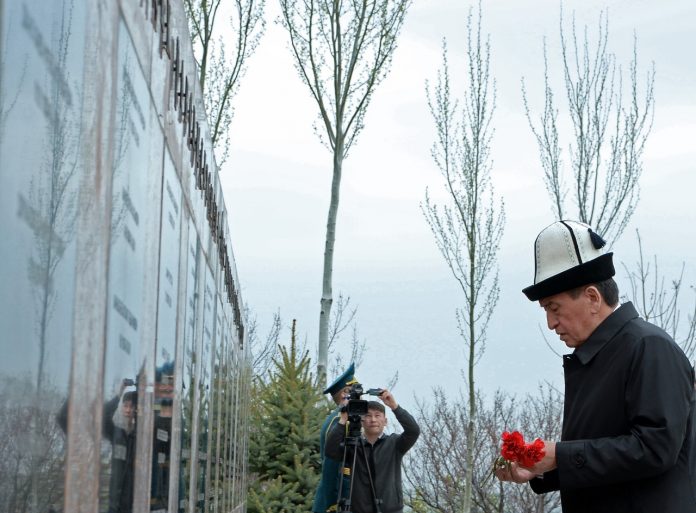 On April 7, 2010 people of Kyrgyzstan took to the streets with demands for resignation of the President K.Bakiev. Thousands arrived to the capital Bishkek from all over the country and gathered at the central square Ala Too in front of the government house. In spite of the security forces firing guns the demonstrators kept storming the government house for the whole day eventually forcing government to resign and President K.Bakiev to run away first to his native region in the South of the country and finally to Belarus.

Due to mass disturbances, 77 people died and more than 300 wounded.The ex-president K.Bakiev, his brother and head of the state security service J.Bakiev and ex-prime-minister D.Usenovhad been convicted for mass killings for life sentences by the court on June 25, 2014.

The reasons of uprising laid in disappointment and indignation by the people against strict authoritarian rule and wide-spread corruption of the ex-president K.Bakiev and his close family members, including his brother and head of the state security service J.Bakiev and son M.Bakiev, who was director of the influential Central Agency for Development, Investment and Innovation and actually controlled the whole economy of Kyrgyzstan.

The notorious regime was involved in gross corruption and international money laundering, suppression of opposition and Mass Media, which lead to beatings and even killings of some of the political leaders and journalists.

Afterex-presidentK.Bakiev’srunaway a provisional government was formed headed by interim president of the transitional period prominent opposition leader RozaOtunbaeva and parliament and government dissolved.

On June 27, 2010 referendum on Constitution changes was held and 90,57% of the voters approved introduction of parliamentary system in Kyrgyzstan.At the same time this plebiscite confirmed the powers of the interim president RozaOtunbaeva and provisional government until December 31, 2011.

Previously Kyrgyzstan since independence in August 1991 had presidential system of governance and first president A.Akaev concentrated all powers in his hands and established family rule. Hewas also overthrown by people’s revolution on March 24, 2005 soon after election to the parliament of his son and daughter in the result of mass vote rigging during parliamentary elections.

The negative experience of the abusive rule of two first presidents of Kyrgyzstan A.Akaev and K.Bakiev, which lead to popular uprisings in 2005 and 2010 and their resignations, resulted in peoples overwhelming support for  parliamentary system with more authority given to the parliament and prime minister and limiting the powers of president to security and foreign policy issues.

On October 10, 2010 parliamentary elections and October 30, 2011 presidential elections had been held in Kyrgyzstan and for the first time in the history of the country peaceful transition of the power of the president successfully passed.

Since that time, Kyrgyzstan entered the period of stability and peaceful political process with regular and fair parliamentary and presidential elections.

On October 4, 2015 parliamentary elections and on October 15, 2017 presidential elections had been held in the country and SooronbaiJeenbekov elected as a new President of the Kyrgyz Republic.

Under the leadership of the President S.Jeenbekov,today Kyrgyzstan is emerging as a democratic state, where national unity and political pluralism, as well asall basic human rights and freedoms are preserved.

The socio-economic situation in Kyrgyzstan is steadily improving and a number of national projects are under realization in the framework of the National strategy of country development for 2018-2040, which aims at raising the level and quality of life of the people through sustainable economic development.

The revolution of April 7 is remembered in the country as a historical date, which laid further foundation for the development of Kyrgyzstan on the way of democracy and freedom. On this day a wreath-laying ceremony at the Monument in memory of the heroes of the April 2010 Revolutionis held and prayers are readin Bishkek and at National Ata-Beyit historical and memorial complex.

The writer is Ambassador of Kyrgyzstan