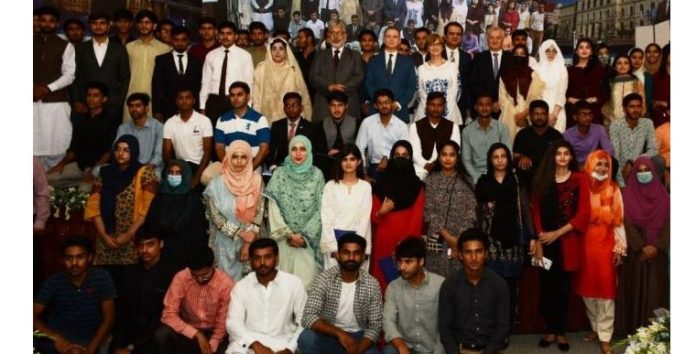 ISLAMABAD, AUG 26 (DNA) — As many as 148 Pakistani students are set to leave for study in Hungarian universities as the Higher Education Commission (HEC) here on Friday held a send-off ceremony to award certificates to the scholarship winners under the Stipendium Hungaricum Scholarship Programme.

Minister for Federal Education and Professional Training Rana Tanveer Hussain attended the ceremony as chief guest through a video link.

Congratulating the scholarship awardees, the minister said that it was an excellent opportunity for the students to enhance their knowledge and skills and get international exposure.  He advised the students to fully utilize their potential in their respective areas of study as well as under the cultural diversity to play a role in further improving harmony between Pakistan and Hungary.

He maintained that the scholarship opportunity put responsibility upon the students to work hard and learn to better serve the country.  He assured that government of Pakistan was fully supportive of the programmes like Stipendium Hungaricum Scholarships.

The chairman HEC  appreciated the support of Hungarian Government for higher studies of the students. He said a large number of Nobel Laureates were the graduates of Hungarian institutions, and they provided guidance to Pakistan to continue  journey of strengthening higher education institutions.

He advised the students to utilize their energies for showing exemplary academic performance and character and play role of Pakistani ambassadors  in Hungary.  Shedding light on the background of the scholarship programme, Dr. Shaista Sohail said that these scholarships began in 2015 with award of 80 scholarships, which was increased to 200 every year in 2017.

She highlighted that government of Hungary had shown interest in continuing the cooperation and renew MoU for 200 scholarships annually for the next three years from 2023-2025.  She underlined that a total of 772 scholarships, including 565 Bachelors, 161 Masters, and 46 Ph.D scholarships, were awarded tho the students to study in Hungary from 2016 to 2021.

She maintained that 148 students including 111 undergraduate, 28 Masters and nine Ph.D, were proceeding this year. “This will take the number of beneficiaries to 920,” she added.  Charge d’Affaires, Tivadar Takacs wished best of luck to the students departing for Hungary and assured that the Hungarian educational system would not pose any unpredictable obstacles for them in their pursuit of knowledge and higher education.

He said that the students going to Hungary had great potential as they had been selected from within a very high number of applicants.  He said that the scholarship programme was a long-term investment in the relations between the two countries.

He urged the students to join  the Pakistan-Hungary Alumni Network after completion of their studies, in order to keep playing  role in  improving the bilateral relations.  Maria Akhtar, alumnus of the scholarship programme, also shared her thoughts and experiences with the scholarship winners. =DNA