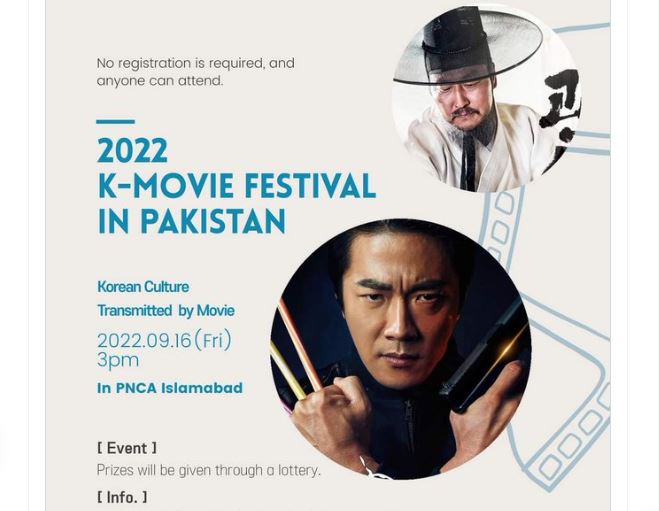 Islamabad, 16 Sep /DNA/ – The Embassy of the Republic of Korea in Islamabad held the 2022 K-Movie Festival atPakistan National Council of Arts (PNCA) on the 16th of September, 2022. This event was held to promotethe vibrant Korean arts and culture. The event was attended by high-level dignitaries including the Heads of Missions, International organizations, Pakistani officials in Islamabad.

The event is a testament to the growing enthusiasm in Korea’s artistic achievements and its cultural legacy among Pakistanis and the world. The Ambassador of the Republic of Korea commented that events like this reaffirm the cultural exchanges are an effective way to enhance bilateral cultural understanding, and shared his hopes that such events would continue to become building blocks towards solidifying and strengthening cultural ties between Korea and Pakistan.

The audience both young and old enjoyed the movie Face Reader, one of the highest-grossing films in Korea in 2013, which took them back in time and drew their attention to the life and struggles of the protagonist face reader who has the skill to assess the personality, mental state and habits of a person by looking at a person’s face.

The event was greatly appreciated by the diplomatic community including the Ambassadors of Sweden, Spain and Turkmenistan. On the occasion, H.E. Mr. Suh Sangpyo commented that among various relations between countries, the people-to-people and cultural relations strengthen the fundamental of the relations. He wished to bolster cultural cooperation exchanges through continuing an exchange of arts, and entertainment.