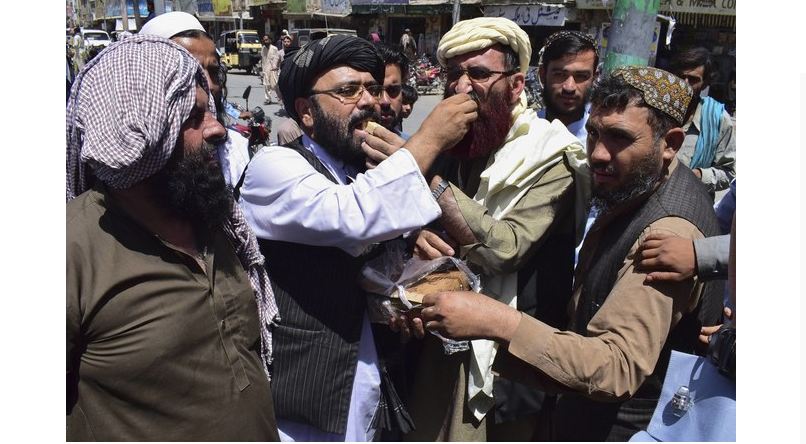 ISLAMABAD: Around 55 percent Pakistanis were ‘happy’ the Taliban would be ruling Afghanistan, the results of a survey conducted by a leading Pakistani research firm showed on Tuesday, with the highest number of such respondents based in the country’s northwestern Khyber Pakhtunkhwa province bordering Afghanistan.

The study was released by Gilani Research Foundation (GRF) and carried out by Gallup & Gilani Pakistan (GGP), which is a local affiliate of Gallup International.

It was carried out among a sample of 2,170 men and women in urban and rural areas of the Punjab, Sindh, Khyber Pakhtunkhwa and Balochistan provinces between August 13 and September 05.

The Taliban captured Kabul on August 15 and announced their interim government — an all-male cabinet — this month.

People from across Pakistan’s four provinces were asked the following question: “Some people are happy that the Taliban will now rule Afghanistan. Some are not happy about that. What is your opinion?”

More people from rural areas (28 percent) were unhappy about the Taliban now ruling Afghanistan as compared to those from urban areas (20 percent).

In Punjab, 54 percent cheered the fall of Kabul to the Taliban, 24 percent said they were displeased by it, 17 percent didn’t know and four percent didn’t answer the question.

In Khyber Pakhtunkhwa, the highest number, 65 percent, were delighted over Taliban rule in Afghanistan, 18 percent were unhappy over it, 15 percent didn’t know and one percent didn’t answer the question.

Fifty-five percent people surveyed in Balochistan were happy over the same, 26 percent unhappy, 17 percent said they didn’t know and two percent did not respond.

In a gender-wise breakdown, it was found that 58 percent of men were happy about the Taliban now ruling Afghanistan as compared to women at 36 percent.

Sixty-eight percent of people above 50 years were happy about Taliban rule, compared to 52 percent under 30 years of age or 55 percent of those aged from 30 years to 50 years, according to the study.

The Taliban, known for their heavy-handed rule during their first stint in power from 1996 to 2001, have pledged a more “inclusive” brand of rule as US troops completed their chaotic pullout. But all the key positions in their interim government have gone to veteran players of the movement.