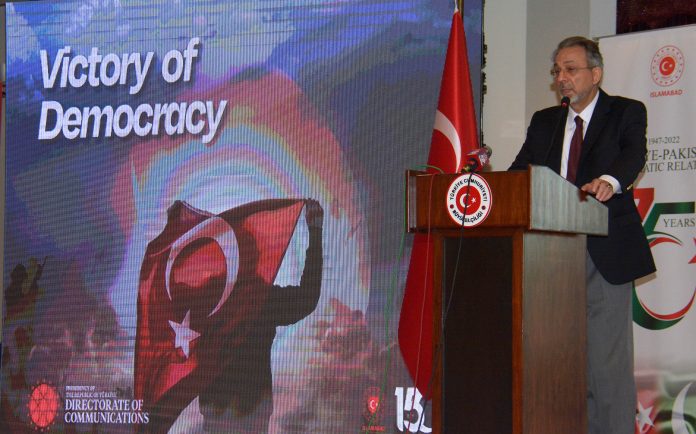 for declaring FETO a terrorist outfit

ISLAMABAD: Dr Mehmet Paçacı, Ambassador of the Republic of Türkiye

ISLAMABAD: Dr Mehmet Paçacı, Ambassador of the Republic of Türkiye

ISLAMABAD: Dr. Mehmet Paçaci, Ambassador of the Republic of Türkiye said on Thursday his country owed a great deal to Pakistan for declaring FETO as a terrorist organization adding the threat was not yet over fully however the Turkish government and people of Turkiye were committed to root out this menace for good.

The newly-arrived Turkiye ambassador expressed these views while briefing the Pakistani members of mass media, at the Embassy premises, on Thursday. It was Ambassador Pacaci’s maiden media interaction ever since his arrival in Pakistan.

Ambassador Paçaci further said, the 15 July failed coup attempt by FETO was the night when Turkish democracy was protected by the Turkish people themselves under the leadership of President Recep Tayyip Erdogan.

He said, “on July 15, the existence of Türkiye was in danger when FETO terrorist organization’s followers attacked but Turkish citizens from all walks of life showed courage and rendered sacrifices to protect their democratic government and institutions.

To a question he said the terrorist organizations by and large extend cooperation to one another and it may have happened in the case of FETO as well. To yet another question about the chief of the FETO, the ambassador said he is living in the United States since long. The Turkiye government has time and again asked the US government to hand him over to Turkiye.

Ambassador said that the followers of FETO tried to assassinate the President of the Republic of Türkiye and attacked the Prime Minister’s vehicle. They bombarded the Grand National Assembly. “The Police Special Operations Center, the crucial counter-terrorism operational body, was bombed by fighter jets, killing 55 police officers and injuring hundreds on the spot”, he added.

Hundreds of civilians protesting the coup attempt in Ankara and Istanbul were shot dead, he informed. He said that it was Fetullah Gülen’s FETO, an organization that secretly worked in Türkiye for 40 years and its main goal was to take control of the state.

For 40 years, this organization had brainwashed the country’s children, brilliant minds in the name of educational institutions, and turned them against their own country.

At the peak of their power, they controlled thousands of schools in Türkiye and more than eight hundred educational institutes worldwide. As civil servants or military personnel, FETO members’ loyalty was not to the nation or to the state they served. They did not care about upholding the country, Ambassador added.

After July 15, 2016 coup attempt: The perpetrators of the 15th of July coup attempt have been brought to justice based on rule of law and fundamental rights and freedoms. A number of judicial processes are still ongoing, he added.

The fight against FETO structures abroad is now among the top priorities of our country. Our main objective is to demonstrate and prove the fact that FETO also poses a threat to the security of all countries where it remains active, Ambassador informed the media.

A similar resolution was passed during the Asian Parliamentary Assembly on 1 December 2016 and ratified on the 12th Conference of the Parliamentary Union of the OIC on 27 January 2017.

In addition to the Turkish Republic of Northern Cyprus, the Supreme Court of Pakistan also declared FETO a terrorist organization with the verdict rendered on 28 December 2018, he added.

Answering a question about FETO’s presence in Pakistan, the ambassador said that two schools of FETO were now being supervised by Turkish Maarif Foundation and we appreciate Pakistan for closing down those schools of FETO at the Turkiye government’s request.

Commenting on the recent visit of Prime Minister Shahbaz Sharif to Türkiye, the Ambassador said that it was a successful visit and President Recep Tayyip Erdogan was expected to visit Pakistan in September this year. Both countries are expected to sign multiple bilateral agreements during the upcoming visit of the Turkiye president.