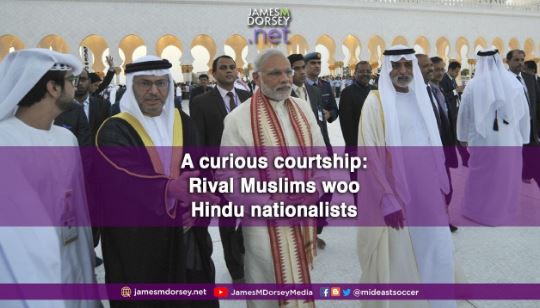 That is because, for the next year, India chairs the Group of 20 largest economies in the world.

At stake for the Muslim rivals, proponents of rival pluralistic and autocratic forms of Islam, is who will help shape a gathering of religious leaders in advance of the September 2023 Delhi summit of G20 leaders.

The gathering would follow a first Religion Forum 20 meeting in Bali in November, where Indonesia, the world’s largest Muslim-majority country and democracy, declared the R20 an official engagement group with a permanent secretariat in Jakarta.

If the Bali R20 involved an attempt by its rival co-organisers, Indonesia’s Nahdlatul Ulama and Saudi Arabia’s Muslim World League, to coopt one another, Delhi promises to be a three-way competition with the United Arab Emirates joining the fray.

The competition for who will be the primary Muslim player in an R20 Delhi summit is part of a larger Muslim struggle that is likely to define Islam in the 21st century.

Senior Indian officials favour embracing the R20 as an official engagement group. But some are concerned that a religious gathering could turn into a platform that takes India to task for its perceived anti-Muslim policies.

The inter-Muslim struggle pits Nahdlatul Ulama’s socially and politically pluralistic and reformist interpretation of Islam against the Muslim World League and the UAE’s autocratic version that embraces social change, rejects political liberalization, and avoids jurisprudential and doctrinal reform of supremacist attitudes that Islam shares with other major religions.

Part of a bold and risky strategy, Nahdlatul Ulama’s partnership with the League that formally ended in late November raised questions about the group’s legitimisation of the Saudi-government agency as a non-governmental organisation.

The League is a de facto branch of Mohammed bin Salman’s government tasked with propagating the crown prince’s insistence that a socially liberal Islam demands absolute obedience to the ruler.

Nahdlatul Ulama’s silence over a new Indonesian criminal code that parliament recently passed unanimously has sparked further questions on how that squares with its unconditional endorsement of the Universal Declaration of Human Rights – a significant differentiator in its rivalry with state-sponsored autocratic versions of moderate Islam.

The law bans extramarital sex and curbs freedom of expression by, for example, outlawing insulting the president, but puts major limitations on who can file a complaint.

Privately, influential Nahdlatul Ulama sources defend the socially restrictive aspects of the law but concede that freedom of expression concerns are legitimate. The sources expect the law to be modified in challenges likely to be filed with the Constitutional Court.

The competition for India’s favour in shaping a religious summit in Delhi is as much a power struggle between rival interpretations of moderate Islam as between the UAE and Saudi Arabia for religious soft power in the Muslim world.

The competition also involves a battle for influence between a G20 legacy group, the G20 Interfaith Forum Association (IF20), that long dominated the G20’s informal religious tack, and Nahdlatul Ulama.

Nahdlatul Ulama’s R20 sidelined the Utah-based IF20, creating an opportunity for the UAE to step into the breach on the back of its convening power and financial muscle.

Organised by the IF20 and the Interfaith Alliance for Safer Communities, a UAE-based group, the Emirates this week is sponsoring a two-day conference of Muslim, Jewish, Christian, Hindu, and Buddhist figures under the patronage of Emirati President Mohamed bin Zayed.

Entitled “Engaging Faith Communities: G20 Agendas and Beyond,” the conference aims to take the wind out of the sails of the Bali gathering and to position the UAE as an autocratic player alongside the Muslim World League.

Little surprise that neither Nahdlatul Ulama nor the League, despite the Emirates’ alliance with Saudi Arabia, are represented at the Abu Dhabi conference.

More surprising is the absence of longer-standing building blocks of the UAE’s religious soft power campaign, such as the Forum for Promoting Peace in Muslim Societies led by Abdallah bin Bayyah, a Mauritanian Islamic scholar, and Hamza Yusuf, one of the most prominent Western Muslim figures.

The contrast between the R20 Bali’s focus and the agenda of the IF20 in Abu Dhabi says much about the difference in objectives and approaches of Nahdlatul Ulama and the UAE.

While the R20 focused on coming to grips with the problematic histories of various religions, including Islam, to generate genuine religious reform, the IF20 is geared towards themes likely to curry favour in Western capitals.

The Abu Dhabi focus is key to the UAE’s continuous effort to ensure that it is a relevant partner that the United States and Europe would want to defend against attack, particularly in the way they did in 1990 when Iraq invaded Kuwait.

As a result, the IF20’s themes include interfaith dialogue, tolerance, conflict resolution, freedom of religion, refugees, the food crisis, trafficking, health care, and social protection whereas the R20 was about shared religious and civilizational values and historical grievances, truth-telling, reconciliation, and forgiveness.

Key sessions of R20 panels sought to answer questions such as “what values do our respective traditions need to relinquish to ensure that religion functions as a source of genuine solutions, and not problems, in the 21st century,” and “what values do we need to develop to ensure peaceful coexistence, and why?”

To put flesh on the skeleton, the R20 secretariat is organising working groups to formulate detailed responses to these questions that could be debated at a second meeting in Delhi.

Also, timed to coincide with Nahdlatul Ulama’s centennial, the R20 is organizing in February a gathering of Islamic scholars, to which Messrs. Bin Bayyah and Muhammed al-Issa, the Muslim World League secretary general, are being invited.

The meeting is designed to kick off a discussion that would result in jurisprudence that would recognize the legitimacy of the United Nations and its charter as well as the principle of the nation state and anchor them in Islamic law.

In doing so, Nahdlatul Ulama hopes to counter notions of a transnational Islamic state advocated by militants such as Al Qaeda and the Islamic State and make the UN Charter legally binding for its Muslim signatories, according to religious law.

The questions posed during Bali R20 challenge Nahdlatul Ulama, given its involvement in the 1965 massacre of perceived communists in Indonesia, as well as the Muslim World League that has failed to account for its past as a primary vehicle of decades of global Saudi propagation of an ultra-conservative, supremacist, and sectarian interpretation of Islam.

The questions also challenge the UAE’s willingness to go to any lengths to impose an autocratic interpretation of Islam that brooks no political or religious dissent.

Speaking at the Bali gathering, Sri Swapan Dasgupta, an Indian journalist, politician, and close associate of Prime Minister Narendra Modi argued that “obfuscation and denial (of traumatic historical events) has only worsened the situation.”

Mr. Dasgupta was referring to Hindu nationalist grievances dating back to the Muslim conquests in the Indian subcontinent in the 13th to 17th centuries that fuel Mr. Modi’s Hindutava ideology.

Mr. Dasgupta did not say that Hindu nationalist India needs to come to grips with the subcontinent’s history in ways that do not boil down to a campaign of revenge against India’s 200 million Muslims, the world’s largest Muslim minority.

The challenges for Muslims in the rivalry to shape the Delhi G20’s religious agenda are no less daunting.

Muslims can choose between taking the high or the low road to coming to grips with history.

The high road involves confronting painful truths in a quest for a healthier, more pluralistic, and socially cohesive society. The low road allows autocrats to either rewrite history or sweep it under the table and opportunistically bend it to their will.

India is not where the battle for the soul of the world’s major religions, including Islam and Hinduism, will be decided, but it is the battle’s next arena.