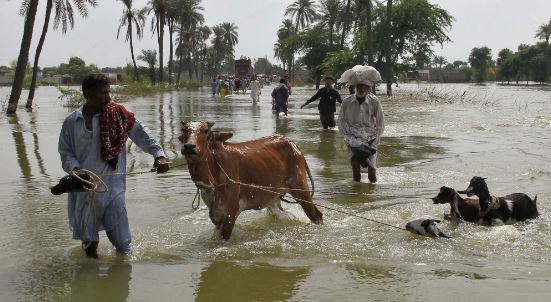 According to Livestock Department Sindh around 9200 cows, buffaloes, sheep and goats only died in flood water since August 25.

Over 4100 Animal yards/houses have been completely destroyed.

KARACHI: Following the devastation of rain and flood the civil society and journalists community have revealed the sad and poor situation as well survival of men, women and children in open sky on the Highway.

Senior TV Journalist Akhtiar Khokhar and civil society leader Khaleel A Chandio expressed their grief and uncontrolled sentiments, told that the Kaktcha houses, villages  washed out in flood and poor men and women with children had no food for survival on roads.

They told after their visit that cities and villages of Sindh have become a story of complete destruction.

Poverty and hunger have revealed many stories on the spots.

According to reports, the destructions of Livestock among a biggest damage has been declared including the district Qamber Shahdadkot, where cattle worth 6 crores have died.

While in Karachi 08 crore cattle have died till now.

Apart from this, the estimate of the destruction of the buildings in the different cattle farms/areas have been estimated at 6 billions they disclosed.

According to Livestock Department Sindh around 9200 cows, buffaloes, sheep and goats only died in flood water since August 25, Khaleel told.