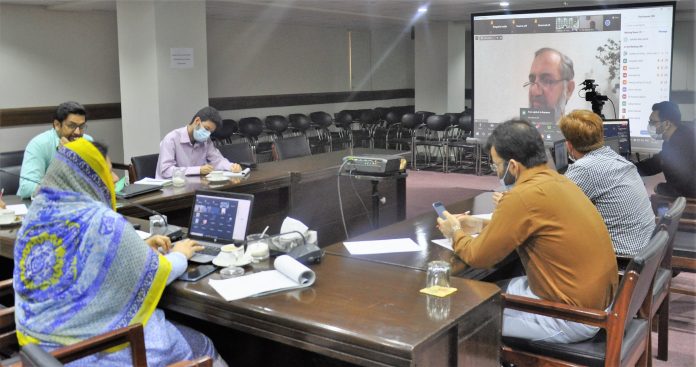 Islamabad, 1 April: Unless peace and stability prevail in war-torn Afghanistan, regional connectivity will remain a pipe dream. This was the crux of a webinar titled ‘Afghanistan-Pakistan-Central Asian Connectivity’, which was organized on Thursday by Institute of Policy Studies (IPS) in collaboration with the Department of International Relations at the Federal Urdu University of Arts, Science and Technology (FUUAST).

Ambassador (retd) Hussain believed that over the years successive Afghan governments have created hurdles in letting Pakistan develop direct road links with Central Asian states; even though the whole region, not Pakistan alone, will benefit from regional connectivity if achieved.

The former ambassador lamented that Pakistan even tried to include Tajikistan in the Afghanistan-Pakistan Transit Trade Agreement (APTTA) to extend linkages. Still, Afghanistan, under the influence of India, created hurdles in making this happen. He further said President Ashraf Ghani rejected the proposed idea of a tripartite agreement and, to complicate matters further, insisted on letting Afghanistan trade directly with India via Wagah in a quid pro quo.

This is the reason, he argued, Pakistan disregarded Afghanistan, which has not overcome violence within its borders, in signing the Quadrilateral Traffic in Transit Agreement (QTTA) with China, Kyrgyzstan and Kazakhstan.

The former Pak ambassador to Afghanistan opined that Afghanistan’s instability creates hurdles in the way of any inter-regional connectivity initiatives, whether it is the Central Asia-South Asia power project (CASA-1000) or the Turkmenistan-Afghanistan-Pakistan-India (TAPI) pipeline project. These projects are far from completion due to political instability in Afghanistan.

He said Pakistan has taken several measures to strengthen land connectivity with Afghanistan including building a highway from Torkham to Jalalabad. Furthermore, Pakistan wants to extend railway links to Qandahar from Chaman and build a motorway connecting Peshawar to Kabul.

The speaker also brought into light the traditional historical, cultural and religious ties the Subcontinent, especially the Indus valley and Gandhara civilizations of Pakistan have enjoyed with the Central Asian region.