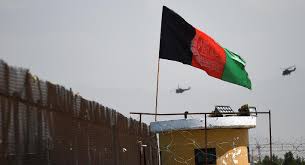 Susannah George and Dan Lamothe reported for Washington Post on November 27: “The United States has closed at least 10 bases around Afghanistan. But drawdown details remain murky”. Closure of bases is part of the complete withdrawal of the US military.Many officials in Afghanistan say “they are uncertain of what’s to come despite a fast-approaching deadline”.Little is known about the current status of many bases in Afghanistan’s most volatile conflict zones where the US support for Afghan operations is critical in pushing back the Taliban.

Some American bases have been completely handed over to Afghan security forces. Others may have been vacated and left in place in a way that they could be occupied again in the future if considered necessary. “It is also unclear how much equipment — more difficult to move than people — is left at each of the closed installations”.

Back amongst the US strategic circles,two narratives: all is well in Afghanistan, as well as, it’s as bad as in 2001 are being kept afloat simultaneously, to either continue with Trump’s policy of complete withdrawal  of troops, or to switch over to Biden’s concept of keeping around 10,000 boys in Afghanistan.

There arealso suggestions about a breakthrough in the talks, reporting that both sides have agreed to include the US-Taliban agreement, UN endorsements for the Afghan peace process, commitments of the negotiating teams and the will of the Afghan people as the foundational base for upcoming negotiations.

Being beneficiary of ongoing chaos in Afghanistan,  President Ashraf Ghani’s dispensation was never in favour of engaging Taliban and it made sure that the process does not move ahead on the pretext that  “the Taliban’s demand are against Afghanistan’s Constitution”.Presidential spokesman Sediq Sediqqi told reporters on November 25 that the Taliban’s demand is “against the Constitution.” Sediqqi said peace is a priority for President Ghani and that the Taliban should join the peace process as it is supported by the international community.  He added that the deadlock in the talks has not broken so far; “Afghan Republic’s negotiating team is trying to break any deadlock and keep the Taliban at the table of negotiations.”

International community continues to show concern about the high level of violence in the country resulting into snowballing of civilian casualties.Nearly 50 percent spike in violence has been reported amid peace talks, causing around 6,000 civilian casualties during this year.As reported by the US Special Inspector General for Afghanistan Reconstruction (SIGAR), in its quarterly report to the US Congress on November 5, attacks, both, against Afghan forces and civilians were 50 percent higher in the three months towards the end of September when compared to the previous quarter, The watchdog reported 2,561 civilian casualties this quarter, including 876 deaths, up by 43 percent from the April to June period.

An immediate ceasefire in Afghanistan is the most sought after item in the peace process.  Reportedly, Afghan chief negotiator Mohammad Massoom Stanikzai and presidential peace advisor Salam Rahimi made an unannounced trip to Kabul, seeking President Ghani’s approval for the agreed formulation.  The Taliban and the Afghan government have been engaged in talks in Doha, since September. The discussions quickly became bogged down by disputes on the agenda, the basic framework of discussions and religious interpretations.

Dozens of foreign nations, international institutions and the European Union took part at a virtual global conference hosted from Geneva. Donor fatigue was evident during the November 24 UN hosted donor conference. Though donors pledged billions to Afghanistan, most of them also attached strings. Many countries imposed restrictions over pledged funds, like, progress in talks between the Taliban and the government, among others.United States and Germany, introduced restrictions on future funding and some committed for just the next year – departing from four-year pledges made in the past.“We’re pleased to pledge today $300m …with the remaining $300m available as we review progress in the peace process,” US Under Secretary of State for Political Affairs David Hale said in a virtual address to the conference.The US has been contributing roughly $800m a year in civilian aid in recent years.Hale said “significant progress” had recently been made, including a tentative agreement on ground rules that could allow negotiators to proceed to the next stage of forming an agenda, however, an increased level of violence in the country seems to depict a different reality in terms of progress.Germany pledged 430 million euros ($511m) in 2021 and signalled it would keep contributing until 2024 but also stressed that progress towards ending almost 20 years of war was needed.

The European Union pledged 1.2 billion euros ($1.43b) over four years, but emphasised aid was conditional.Norway will keep aid to Afghanistan at around NOK 650 million in 2021, and continue at same until 2024. However, Norway could reduce the aid if the peace talks and anti-corruption efforts fail. “Our support and further levels (of support) will be assessed on the basis of the authorities’ efforts against corruption,” Foreign Minister Ine Eriksen Søreide (H) said. She added that satisfactory progress in the peace process is also important. “Our assistance will support the Afghan authorities’ goals of democracy, sustainable development and modernization, help lift people out of poverty, improve governance, reduce corruption, and improve the daily lives of Afghans,” EU Commissioner Jutta Urpilainen said.

Uncertainty over whether the compromises needed for peace might lead to backsliding on human and women’s rights has also made some countries wary about making long-term commitments to an Afghan administration, which needs foreign money to cover about three-quarters of its spending.“Afghanistan’s future trajectory must preserve the democratic and human rights gains since 2001, most notably as regards to women and children’s rights,” EU foreign policy chief Josep Borrell said.“Any attempt to restore an Islamic emirate would have an impact on our political and financial engagement,” he added.The UK said it would pledge $227m in annual civilian and food aid. Curbing corruption was another wish on the part of countries considering donations.

Afghanistan is likely to receive 15 to 20 percent less funding than the roughly $15.2b pledged at the last conference in Brussels in 2016 due to uncertainties over the peace process and Covid-19. President Ashraf Ghani has estimated that aid covers about 75 percent of the country’s public spending.

Breshna Omarkhel has reported for VOA that former NATO commander expects Joe Biden Administration to Keep Troops in Afghanistan.James Stavridis, retired US Navy admiral and former military commander of NATO, said the US and its allies should keep about 10,000 troops in Afghanistan,for the foreseeable future to pressure the Taliban into a peace agreement with the Afghan government.

More than one prophesies are being aired about the future prospects of Afghan peace process. Afghanistan’s Presidential Palace has confirmed the predictions by many other individual thin tanks and individual strategists that there had been no progress in Doha Talks. Taliban have effectively time out Donald Trump. And they are looking forward for a fresh start with Joe Biden.