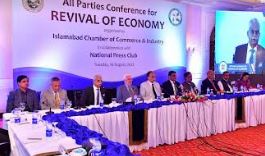 Addressing the Conference, Ahsan Iqbal, Federal Minister for Planning & Development appreciated ICCI for organizing APC and termed three Es, education, enterprises and exports as key for reviving Pakistan’s economy. He said that all political parties should agree on a common agenda to turn around the economy of Pakistan.

Miftah Ismail, Federal Minister for Finance said that diverting domestic manufacturing to exports, improving agricultural productivity, providing education to the out of school children, focus on science & technology and living within our own means was very important to revive the economy.

Muhammad Shakeel Munir, President ICCI welcomed the representatives of all political parties and said that the purpose of organizing APC was to bring all stakeholders at one platform to develop a future roadmap with consensus for reviving the economy.