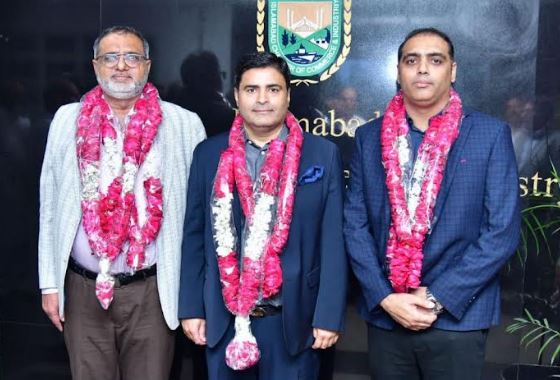 Islamabad: /DNA/ – Ahsan Zafar Bakhtawari has been elected as the new President, Islamabad Chamber of Commerce & Industry for the year 2022-23. The election results were announced by Zahid Maqbool, Chief Election Commission during a ceremony at ICCI. Faad Waheed was elected as Senior Vice President and Engr. Azhar ul Islam Zafar as Vice President ICCI for 2022-23. All the candidates were elected unopposed and they will formally take charge of their portfolios on 1st October 2022.

Speaking at the occasion, the newly elected President ICCI Ahsan Zafar Bakhtwari said that the economy of Pakistan was passing through a very challenging time of its history and stressed that the government should provide maximum facilitation and incentives to the business community to promote country’s trade and exports that would help to improve the health of the economy. He emphasized that the government should engage the private sector in consultation to devise a comprehensive strategy in order to overcome the economic challenges of the country. He appreciated the efforts of current President ICCI Muhammad Shakeel Munir and his team for taking many productive initiatives to address the issue of business community and resolved that he would take all possible measures to promote the interests of business community. He thanked the Chairman & members of Founder Group and all members of ICCI for showing confidence in his abilities and assured that he would try to deliver up to their expectations.

Khalid Iqbal Malik, Chairman Founder Group congratulated the newly new office bearers of ICCI for their unopposed election. He hoped that they would set new standards of good performance and play an effective role for resolving the key issues of the business community. Founder Group Election Campaign Co-Chairmen Muhammad Ejaz Abbasi and Sheikh Amir Waheed also congratulated the newly elected office bearers of ICCI and hoped that they would work hard to address the key issues of business community.

The newly elected Senior Vice President Faad Waheed and Vice President Engr. Azhar ul Islam Zafar said that facilitating the business community in business development would be the key focus on their efforts. They thanked the Founder Group and ICCI members for electing them unopposed and ensured that they would try to deliver best performance.

Muhammad Shakeel Munir President, Jamshaid Akhtar Sheikh Senior Vice President and Muhammad Faheem Khan Vice President ICCI congratulated the newly elected office bearers of ICCI and assured them of their full support in discharging their responsibilities. They highlighted the key achievements of their tenure and hoped that the new team would achieve many new milestones for ICCI and for the business community.