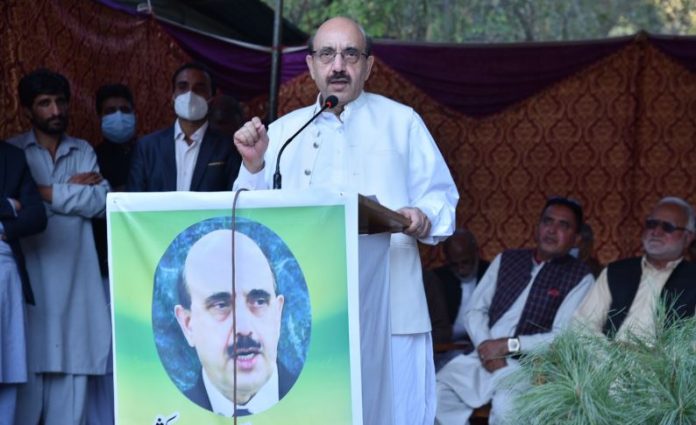 RAWALAKOT, October 16: The Azad Jammu and Kashmir (AJK) President Sardar Masood Khan has said that Pakistan would never take any decision which is detrimental to the UN resolutions on Kashmir or weakens the stand of the people of the state. “We want accession of the whole of Kashmir to Pakistan and this will be decided by the people of Jammu and Kashmir collectively,” he stressed.

Addressing a public gathering at Berri village near here on Friday, he said that the people of the liberated territory including Berri had shed their blood for freedom and to become part of Pakistan, but their mission is still unaccomplished.

He said that we must understand that Kashmir was being disintegrated by not Pakistan but India which on 31 October 2019, first bifurcated Kashmir into Ladakh and Jammu-Kashmir declaring them part of the Indian Union, and the very next day, it released fake maps showing Azad Kashmir and Gilgit Baltistan as parts of India.

The AJK president said that Pakistan was the only a country which courageously and firmly stood with the Kashmiri people, and we need to further strengthen our bonds with the state of Pakistan. He maintained that despite being divided in various political parties and having political differences, it is a matter of great pride for us that political leadership of the liberated territory is unanimous on the Kashmir issue, freedom from India, and the right of self-determination of the Kashmiri people.

Sardar Masood Khan said that we feel the agonies and the pain of our brothers and sisters in occupied Kashmir, and it is our national and religious obligation to help them to get rid of these miseries.

About Gilgit Baltistan, he said that all political parties of Azad Kashmir, All Parties Hurriyat Conference as well as Jamaat Islami Gilgit and Jamiyat Ulemae Islam have the same stand but other parties of Gilgit-Baltistan have a different stand on this issue. Therefore, it is necessary that all the stakeholders sit together to make any decision about the future of this region.

Referring to the demands of the people of the area, Mr Khan said that Rawalakot, Beirri, Pachiyot and all adjoining areas are beautiful gifts of nature which we should cherish and develop these areas to turn them into tourism hubs so that the economic conditions of the people can be improved and new employment opportunity in the areas could be created.

He said the development of the basic infrastructure of the area was a priority of the government to make these areas attractive for both domestic and international tourists. He said that in a democratic society the people do not need to pursue the rulers and their elected representatives for resolution of their problems but it is the duty of the elected representatives to go to the people and find out their problems and solve them instantly.

Earlier in their addresses, various speakers demanded that a monument should be built in memory of the martyrs of Beirri, provision of the basic health centre in the area, up-gradation of Government Boys High School as college and construction of an examination hall to alleviate the difficulties of the students.

The speakers also paid tributes to President Sardar Masood Khan for his tireless efforts to resolve the Kashmir issue and raise the voice of the people of Occupied Jammu and Kashmir in various forums of the world.

Later, the president also visited Mujahidabad where traders leaders Sardar Toseef Aziz, Mumtaz Hussian and Sardar Javed Sadiq apprised him of the problems of the local people including the business community. A delegation of the students of University of Poonch also called on the state president and apprised him of their problems including a reduction in fees for the period of Covid-19 pandemic and increase of seats for students of Khyber Pakhtunkhwa and FATA in different departments of the university.