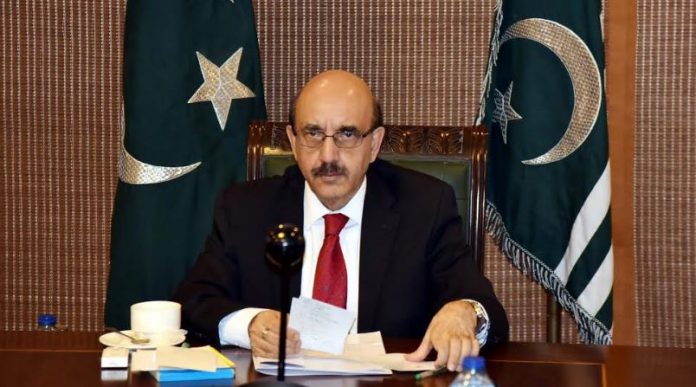 ISLAMABAD, Oct 27: The President of Azad Jammu and Kashmir, Sardar Masood Khan on Tuesday urged the international community to intervene and stop India from death and destruction, the genocide of Kashmiris and evicting them from their land and homes in Illegally Occupied Jammu and Kashmir (IIOJK).

He also called upon the UN Security Council play its role in finding a political and diplomatic solution to the Kashmir dispute in accordance with the resolutions on the issue to save the region from devastation and to ensure peace and security of the region.

Addressing two international webinars and two national conferences on the occasion of the 73rd anniversary of Indian military occupation of occupied Kashmir and the Black Day being observed by Kashmiris on both sides of LoC, in Pakistan and all over the world against its illegal occupation, he said that the Kashmir issue emerged as a result of illegal and the immoral military occupation of Kashmir by India in 1947 and today it has all the potential of taking India-Pakistan hostility to the nuclear level.

Addressing webinars organized by the Scottish Human Rights Forum and Kashmir Council Sweden, the President rejected Indian claim that Kashmir is a bilateral dispute between the two countries.  He said it was an international dispute on which the UN Security Council had passed several resolutions and the issue was still on the agenda of the Security Council.

Saying that there are three parties to the Kashmir dispute, Khan asserted that apart from Pakistan and India, the people of Jammu and Kashmir are the principal party to the long-standing dispute and the participation of Kashmiri people in any parleys to resolve the issue was inevitable to make the process a success.

He emphasized that that solution to the Kashmir issue lies in a free and fair plebiscite under UN supervision and in accordance with UN Security Council resolutions. He maintained that before any talks on Kashmir it was necessary for India to withdraw all measures it took before and after August 5, 2019, with regard to Occupied Kashmir in violation of UN Security Council Resolutions 92 and 122.

India, he said, also needs to take back actions such as unilaterally changing the disputed status of the region and altering the demography of the occupied territory. He said that the UN Security Council should play the role of mediator to resolve the dispute and the UN Secretary-General should appoint a Special Representative to take forward the diplomatic process.

Addressing a conference organized by the Kashmir Institute of International Relations (KIIR), the president said that the bond of love and the brotherhood between Kashmiris and Pakistan was eternal and no power on earth could separate them from each other. He said that India had used every tactic in the last seven decades to integrate the Kashmiris with Indian society and win their hearts and minds but it had failed and now it had hatched a nefarious conspiracy to wipe out the entire Kashmiri nation.

He said that dialogue with India could not be successful without the participation of genuine representatives of Kashmiris. He said that after August 5 last year, the entire Kashmir Valley was under siege where the Indian Army was selectively killing the youth every day, arresting them and putting them in jails. In the last one year, 14,000 youths have been arrested and locked up in various jails in Kashmir and India.

The President said that even children of Kashmir and women were also not safe from Indian barbarism, and hence, it was obligatory for the international community to take congnizance of gross violations of human rights by accelerating efforts to resolve the dispute through peaceful means.

Praising the efforts of Altaf Wani, Director, Kashmir Institute of International Relations, the President said that his institute was playing an important role in raising the voice of oppressed Kashmiris in various forums of the world.

Addressing another function organized by the Pakistan Arts Council Rawalpindi, President Masood said that the extremist policies of the Indian Prime Minister Narendra Modi have put the peace and security of the entire region at stake.

Comparing Azad Kashmir with the occupied part of the state, the President said that in fact no comparison could be made between the two parts of the state. Innocent people are being killed in the occupied part of Kashmir. They are arrested and made disappeared. Young people are blinded by being shot in the eyes and women are sexually abused to terrify the population. He said people in Azad Kashmir are free and they have all civil liberties and fundamental rights.