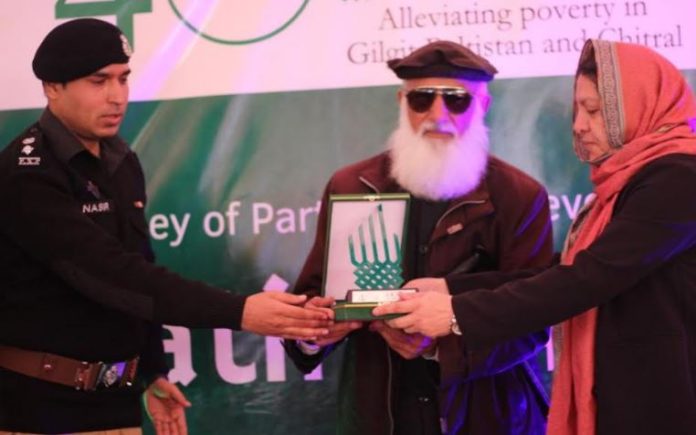 Chitral, 22: The Aga Khan Rural Support Programme (AKRSP) is commemorating 40 years of empowering communities in Gilgit-Baltistan and Chitral. The inaugural ceremony of the three-day event in Chitral under the theme ‘Celebrating 40 years of New Localism’ began by recognising the commendable services of community members.

The event’s chief guest Mr. Anwar ul Haq, Deputy Commissioner, Lower Chitral acknowledged that “AKRSP is the only non-governmental organisation working more than any other organisation in the region. The AKRSP model is sustainable and pro-people.” He felicitated AKRSP for completing 40 years, and applauded AKRSP’s role in building resilient communities in Gilgit-Baltistan and Chitral.

AKRSP’s development approach is based on the belief that local communities have tremendous potential to plan and manage their own development, once they are organized and provided access to necessary skills and capital. Since its inception, AKRSP has trained over 126,000 women and men in different technical and vocational fields, completed 4,706 community infrastructure projects benefiting more than 380,000 households, and planted tens of millions of trees. It has helped establish and mobilise 5,249 Village and Women’s Organisations representing more than 78% of the households in Gilgit-Baltistan and Chitral. These organisations have saved more than PKR 500 million, and disbursed PKR 2 billion as loans.

Mr. Jamil ud Din, General Manager, AKRSP, highlighted that AKRSP’s 40 years of community service would not have been effective without the continuous support of the local communities. He applauded the role of local communities in empowering themselves through organisation, skill-building,and savings – the three fundamental principles taught by AKRSP.

AKRSP’s former board members, community members, poets, writers, and other dignitaries also expressed their views at the inaugural event and appreciated AKRSP’s efforts in the development of Chitral.