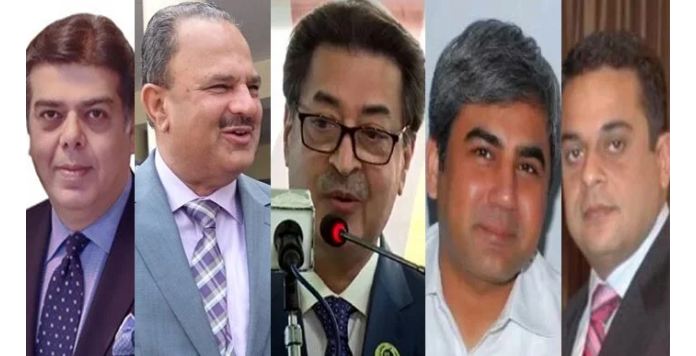 ISLAMABAD/PESHAWAR: The Election Commission of Pakistan (ECP) will pick one person out of the four forwarded to it today (Sunday) to lead the interim Punjab government during the polls after the government and opposition failed to develop a consensus on a caretaker chief minister.

A meeting has been summoned by Chief Election Commissioner Sikandar Sultan Raja to deliberate over the names of Punjab’s interim CM. The matter was sent to the electoral body under Clause 3 of Article 224-A of the Constitution.

“Provided that in case of inability of the committee to decide the matter in the aforesaid period, the names of the nominees shall be referred to the Election Commission of Pakistan for final decision within two days,” says the clause.

Today (Sunday) is the last day for the electoral body to pick a name for the caretaker chief minister. As per sources in the ECP, a meeting will be held today and all eyes were now on the commission.

The matter landed at the ECP after a parliamentary committee, constituted by the Punjab Assembly speaker, failed to evolve a consensus on a candidate for the slot of the caretaker chief minister.

The six-member committee, having equal representation from the treasury and opposition, had only a day to deliberate upon the nominations made by the outgoing chief minister and opposition leader.

Though, as per Article 224-A of the Constitution, the parliamentary committee has three days to select one of the four nominees yet to a delay in the notification for the formation of the panel, the committee was left with only one day to consider the four names.

Elahi, an ally of Pakistan Tehreek-e-Insaf (PTI), has already announced to approach a court if any controversial person was selected by the ECP from the four-nominee panel.

On the other hand, Khyber Pakhtunkhwa Governor Ghulam Ali administered the oath to Mohammad Azam Khan as the caretaker chief minister of the province.

The oath-taking ceremony took place at the Governor’s House on Saturday, attended by the authorities concerned.

Unlike Punjab, the appointment was made a day after former CM Mahmood Khan and opposition leader Akram Khan Durrani decided to nominate Azam Khan after holding a meeting in Peshawar.

Caretaker Chief Minister Mohammad Azam Khan is a renowned bureaucrat. He has served as Chief Secretary KP (1990-93), Finance Minister KP (2007-2008). He has also worked on other key posts.

The government and the opposition remained at loggerheads over the appointment of Punjab’s caretaker chief minister, as the parliamentary committee — formed on Thursday — comprising three members from both sides could not reach a consensus on the matter in a meeting held on Friday.

Pakistan Muslim League-Nawaz (PML-N) leader Malik Ahmad Khan, speaking to journalists after the meeting, said: “This was an opportunity to settle things politically, but that could not be done here.”

“When there are so many polarised positions, there can be no agreement.”

Meanwhile, Pakistan Peoples Party (PPP) leader Hassan Murtaza also lamented the stalemate, saying, “When the house was small, the people were big; now the house has become big, while people have become small.”

“Unfortunately we could not agree [on a name], we are not leaving with good memories,” he added.

Brief profiles of all nominees:

Lahore-born Mohsin Raza Naqvi is a journalist by profession. He got his higher education in the USA and was associated with the American TV channel CNN during his stay in Miami. After returning to Pakistan, he served as the regional head of CNN.

According to a report, Benazir Bhutto, who Mohsin had interviewed, was the last person she contacted before her assassination.

Mohsin founded the local media City News Network in 2009 at the age of 30 and now owns six news channels and a newspaper. He is also widely known in political circles and has strong relations with leading political figures.

Cheema, known as the best administrator during Shehbaz Sharif’s tenure as chief minister, is also called the “Metro Man” among his close friends and political circles.

Cheema was a PAS (Pakistan Administrative Service) grade 20 officer and served as the chief executive officer of QATPC, owned by the Government of Punjab.

In 2005, the then chief minister Parvez Elahi selected him to oversee his marquee project “Parha Likha Punjab”.

The Punjab civil servants attribute the project’s success to Ahad’s management skills and hard work. Cheema remained in NAB custody during Imran Khan’s tenure, however, he was acquitted of the charge later.

PTI’s first nominee for caretaker Punjab CM is the incumbent secretary Cabinet Division, Ahmad Nawaz Sukhera, who is due to retire on January 31.

A Harvard graduate, Sukhera joined the civil services of Pakistan in 1985 and served as secretary of trade, information, privatisation, textile, and his latest stint is as the federal secretary.

He also held the additional charge of PTV while serving as the secretary of information.

PTI’s second nominee is Naveed Akram Cheema, who served as the chief secretary of Punjab and also served twice as the manager of the Pakistan Cricket Team.

Naveed first took over as manager after the infamous spot-fixing case during the 2010 tour of England, and the second time just ahead of the 2015 ODI World Cup after retiring from the civil services on December 31, 2014.