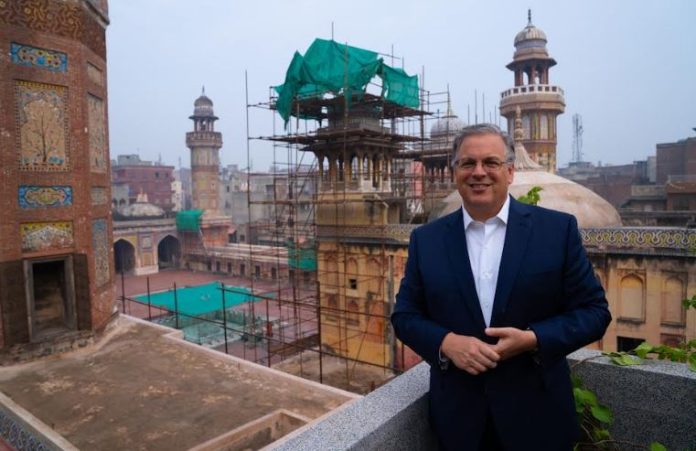 During his three-day maiden visit to the provincial capital since his arrival in Pakistan, the US ambassador will visit various places besides watching the flag-lowering ceremony at the Wahga. He will also watch the Pakistan-England T20I match at the Gaddafi stadium during his sojourn.

Wazir Khan mosque, since 2009, has been restored and preserved through the Ambassador’s Fund while the work on the restoration of the domes inside and different shops and ‘hujras’ outside the mosque was in progress.

“It is inspiring to see work done at this cultural heritage of such magnitude and it continues to be done. The United States government is committed to preserve the cultural heritage sites in Pakistan and the projects like this exemplify depth and breadth of our partnership”, the diplomat said, adding that he looks forward to continue the Pak-US partnership in future.

Donald A. Blome said,”Pakistan is passing through the most difficult times due to the incessant flooding in most parts of the country and was saddened by the loss of lives and livelihood”, adding that the United States government stands side by side with Pakistan.

The US envoy said his visit to the city was significant as Pakistan and the US celebrate 75 yeas of diplomatic ties, adding such projects were hoped to shape the surroundings and future of our children.

Earlier, the Director General Walled City Lahore Authority (WCLA) Kamran Lashari briefed ambassador Donald Blome on the restoration and preservation at the Wazir Khan Mosque. He also shed light on the restoration of other cultural heritage sites by the WCLA.

The ambassador Donald Blome visited different parts of the 17th century Mughal era mosque. He was shown round the houses renovated on the Northern side of the gate while had had the aerial view of the mosque from the adjacent roofs. Blome also visited the mosque and hailed the intricate faience tile work and the fresco on the interior surface of the mosque. He also showed keen interest in the calligraphy work.

The ambassador visited different artifact shops in the outer courtyard of the mosque and interacted with the shop keepers. He admired the tireless efforts of the architects, artists and the artisan in restoring the beauty of the spectacular place.