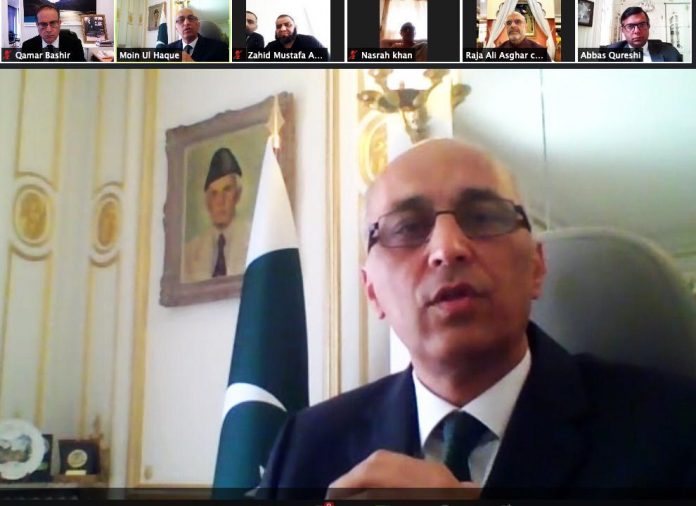 Paris 5 June 2020.  The Ambassador of Pakistan to France Mr. Moin ul Haque held a virtual meeting today with Kashmiri and Pakistani diaspora in France on the Kashmir issue.

He apprised them of recent developments in Indian Occupied Jammu and Kashmir ( IOJK) including illegal Indian actions to change the demography of the region.

He told them that the Government of Pakistan under the leadership of Prime Minister Imran stand by the people of Kashmir, and Foreign Minister Shah Mehmood Qureshi has raised the Kashmir issue with the United Nations and his counterparts in all important capitals.

He also informed them of the positive role being played by the various human rights organizations, parliamentarians including members of the European Parliament, and journalists around the world in condemning the Indian excesses in IOJK and raising their voice for the fundamental rights of the people of Kashmir.

While appreciating the efforts made by Kashmiri and Pakistani diaspora in France for the Kashmir cause, the Ambassador urged to intensify them and not to forget their Kashmiri brothers and sisters at a time when the world’s attention is focused more towards the coronavirus pandemic.

The Kashmiri and Pakistani community members shared a number of suggestions with the Ambassador so that they could better project the Kashmir cause with one voice. They also assured of their full support to the Embassy and the Government of Pakistan in highlighting the Kashmir issue at all forums in France.