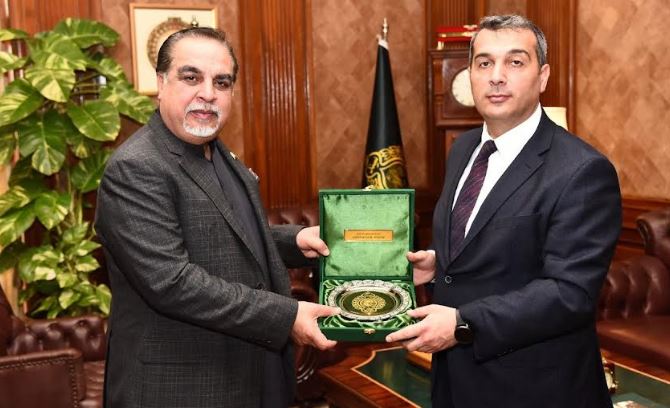 KARACHI, JAN 28 /DNA/ – Khazar Farhadov, Ambassador of the Republic of Azerbaijan to Pakistan met with Imran Ismail, the Governor of Sindh Province of Pakistan. Expressing his gratitude for the warm welcoming, Ambassador Khazar Farhadov talked about the high-level relations between two countries and noted that Azerbaijan and Pakistan have always supported each other both bilaterally and internationally.

Stressing that Azerbaijan is located at the crossroads of East-West, North-South transport and communication corridors, the Ambassador informed about a number of international projects implemented by the Republic of Azerbaijan.

Speaking about Azerbaijan’s economic potential, Mr. Farhadov stressed the importance of expanding trade relations between the two countries. In this regard, touching upon the activities of the Azerbaijan-Pakistan Intergovernmental Joint Commission, Mr. Farhadov also drew attention to the working groups on energy, transport, information technology, health, banking, youth and tourism under the IJC.

Mr. Imran Ismail, the Governor of Sindh province of Pakistan noted that Azerbaijan and Pakistan are brotherly countries.