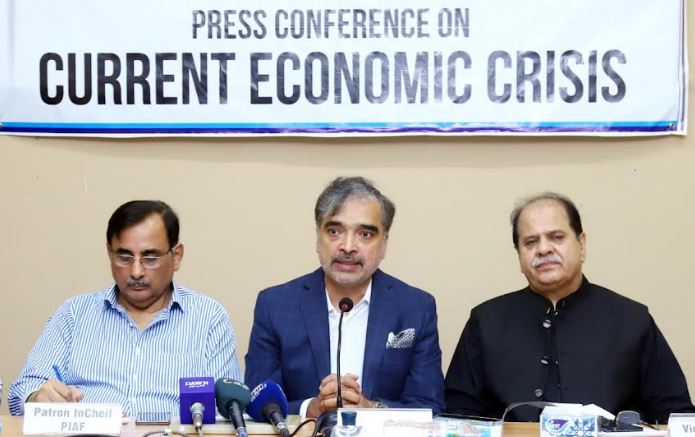 ISLAMABAD, JUL 23 /DNA/ – The Pakistan Industrial and Traders Associations Front (PIAF) has demanded of the government to establish an Economic Crisis Management Board in close consultation with the business community, in line with the National Command and Operations Center (NCOC) formed in corona virus period or National Disaster Management Authority formed in flood emergency, as the country has been facing severe economic crisis mainly due to political instability.

PIAF Chairman Faheem Ur Rehman Saigol, accompanied by the PIAF patron-in-chief and Businessmen Panel (BMP) Chairman Mian Anjum Nisar, while addressing a press conference held here at PIAF office on Saturday, stressed the need for taking the economic crisis seriously, asking the authorities to form a board of economic team, including country’s financial and economic experts taking the FPCCI, major chambers and PIAF onboard to tackle the business community’s issue on day to day basis amid skyrocketing inflation and huge depreciation of rupee against dollar. Pakistan needs to get rid of IMF and increase its reliance on indigenous resources, as borrowing and bailouts has landed the country in a debt trap, he added.

Perturbed with the ongoing political uncertainties followed by unprecedented depreciation of rupee against dollar, the PIAF Chairman urged the treasury and opposition to resolve the issues through talks as unrest creating unstable economic conditions, calling for controlling instability of rupee against the US dollar.

Faheem Ur Rehman Saigol feared that political climate of the country has become unpredictable due to political uncertainty, reducing the level of investment and affecting the economic growth of the country, suggesting the government as well as the opposition parties to settle issues through talks, which the right way to resolve the issues.

Moreover, he observed that dollar continued to appreciate against the rupee also because of the higher current account deficit and burgeoning import bills. Besides increasing exports and controlling imports the government will have to take administrative measures.

PIAF patron-in-chief and Businessmen Panel (BMP) Chairman Mian Anjum Nisar, addressing the press conference said that this situation might create unstable economic conditions, generating higher risks, and transforms into low investment while inflation is one of the key sources of uncertainty. The high rate of inflation leaves the nation uncertain about potential investments, he added.

He said the government should announce economic emergency as the country was facing severe economic challenges with unprecedented depreciation of the rupee against the dollar.

He said that PM Shehbaz should immediately call meeting and take on board all political parties to make day-to-day decisions on the economy, he said.

Pakistan is going through a severe economic crisis and unfortunately mainstream political parties have not come up with any effective measures to save the economy, he said.

We are deeply concerned over the government’s unconcerned attitude to deal with the current economic challenges, heightened political uncertainty, steep devaluation of the rupee, ineffective role of the State Bank of Pakistan and unregulated profiteering by banks, he said.

He demanded that the SBP governor be appointed as soon as possible to manage affairs of the central bank.

Anjum Nisar expressed serious concerns over SBP’s uncaring approach to control present rupee devaluation and demanded that it should take urgent steps to control increasing rupee-dollar parity, as the dollar has touched the highest ever rate of Rs230, which is adversely affecting the business activities and the industries are now on the verge of collapse due to constantly increasing cost of production.

He said due to high dollar rate, the imports have also become costlier, making it difficult to run industries.

Banks are opening the L/C’s on the rate of 242 and above for oil companies, following no inter-bank rate.

Lashing out at the banking sector’s exploitation of the trade and industry the PIAF leadership appealed to the State Bank of Pakistan to intervene immediately, as the commercial banks are not following the inter-bank rate amid constant slide of the local currency against the US dollar, creating panic like situation in the country.

Presently, the interbank rate of rupee-dollar exchange is hovering around 228-230 but the commercial banks are charging arbitrarily in the range of Rs235-242 against the greenback, they said.

The PIAF leadership also criticized the late notification of releasing containers imported goods that were banned through SRO 598(I)/2022. They said that importers were additional hit of hefty demurrage and detention which was causing severe distress among them.

The importers strongly denounced the non-clearance of containers at the ports subsequent to the ban imposed on luxury items. The ban was imposed on 85 categories of luxury items vide SRO 598 (i)/2022 which was issued on May 19, 2022.