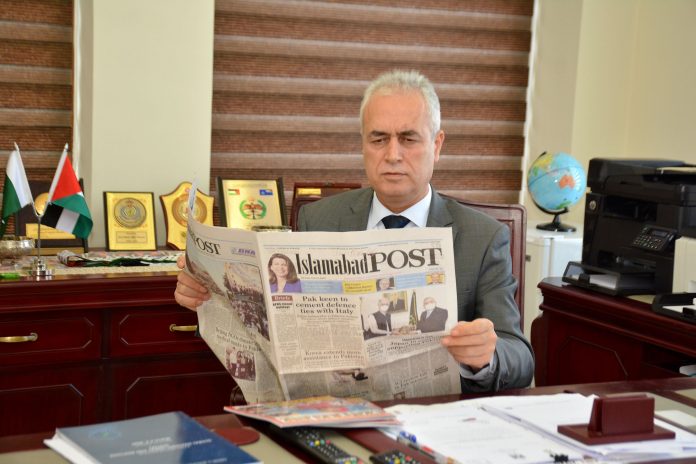 ISLAMABAD: Ambassador of Palestine to Pakistan Ahmed Ameen Rabei has said Israel wants to annex parts of Palestine but we will strongly resist this move and do whatever we could to thwart this move.

He said Palestine is banking on its friends like Pakistan that they would extend all possible support in this regard.

He said Palestinian National Authority was established after Oslo agreements in 1994 on the land occupied by Israel in 1967 , that includes west bank with Jerusalem and Gaza strip

According to agreements, in 1998 an independent Palestinian state will take place, which didn’t happen. Israel has adopted policy of stealing land in favour of settlers, now in west bank 530 settlements (700,000 settlers).

After shifting American embassy to Jerusalem and disclosing the deal of century by President Trump, Israel is planning to annex 30% of west bank , which is fertile land and contains 60% of water reserves .

While dilating upon their plans to thwart Israeli move the ambassador said, they were working to unite their ranks first. Secondly they had to depend on the support our brothers.  Palestine is a member of OIC and Arab League, they recognised our country and they sponsored agreements signed between us and Israel .

He added, the United Nations and friends have to play their due role in this regard.

To a question Ambassador Ameen said,  we have learned last decades how to resist the occupation, our roots are deep in  Palestine .Palestinian National Authority with the collaboration of civil society and University students have worked a plan to protect the land  and not to Israeli troops or settlers to grab it .

To a question about Group captain Saif Ambassador said,  Group captain Saif Azam was deputed by Pakistan Air force to train Jordanian pilots  , in 1967 war between Arabs and Israel , he fought bravely when Israeli planes attacked military airports in Jordan and Iraq and could shoot down 3 Israeli war planes in few days  .

Palestinians are proud of him and I believe every Muslim should remember him and PAF pilot Abdelsattar Alvi , the other hero , who shot down an Israeli war plane in 1973 war

The lesson we learn from these Mujahids shows when Muslims unite their ranks and train themselves hard, they do better and the result in every battle , we are victorious

While talking about bilateral ties he said, Palestine, Pakistan relations go back to 90 years , when the Muslim poet Allama Iqbal along with of Muslim league members attended first Islamic conference in Alquds Alsharif 85 years ago.

Then the mufti of Palestine, Haji Ameen Alhusaini visited Pakistan, immediately after independence, and met with father of the nation, Mohammed Ali Jinnah.

Pakistan stood by Palestine all the time, at UN ,OIC,and other international forums  .Pakistani volunteers , along Palestinian fighters fought Israeli troops many battles , where many of them embraced shahadat while defending Palestinian refugees and Lebanese civilians as well  .

In educational field , Pakistan has opened its institutions for Palestinian students 60 years before, more than 40.000 Palestinians graduated from universities here ,many of them serving in Palestine as ministers, members of parliament, ambassadors,  directors of hospitals and directors of big companies .

I call them ambassadors of Pakistan. In economic field, Pakistani government assisted financially in building our embassy and is continuing to pay its share in Unrwa and other related UN organisations  Palestine opened its first mission in Islamabad after second Islamic summit in Lahore 1974 , it was upgraded to embassy in 1988 after declaration of independence in Algiers.

It is worth mentioning that 25 years ago, Alquds Alsharif and Islamabad were declared twin cities.  The ambassador further said that he is keen to promote and strengthen economic ties between the two countries. Currently the trade volume is only USD 2o million per annum which is very nominal. He said he had already visited various chambers of commerce and industry in Pakistan in order to explore business opportunities with them.

Similarly, I have talked to businessmen of Palestine also and urged them to come to Pakistan and look for different joint ventures with the Pakistani counterparts. To a question about direct imports from Pakistan, the ambassador said, currently we cannot import directly goods from Pakistani however we can do it through Jordan. We can talk to businessmen in Jordan who can play as a bridge between the businessmen of Palestine and Pakistan.

Ambassador Rabei said agriculture was yet another sector where both countries can cooperation given the fact that both countries are rich in agriculture products. He said he is already in contact with relevant quarters in this regard and expecting a breakthrough soon.

To a question about role of Arab League the ambassador said, Arab league has been supporting Palestine issue, unfortunately, many Arab countries are busy with their internal conflicts, which has weaken the role of Arab league.

OIC was established in 1969 after Masjid Aqsa was torched by some Israelis.  Since then, all OIC resolutions emphasized on a just solution, right of return of Palestinian refugees and establishment of independent Palestinian state with Alquds Alsharif as  its capital

We wish that both organisations take a serious stand in favour of Palestine and other Muslim issues. Super powers had helped in creating Israel illegally in 1948 , soon became full member of UN , ignoring it’s own resolution 181 , which calls for creation of two states, Palestinian and Jewish  in 1947.

Since then, Israel has been refusing to implement scores of UN resolutions. The United States has played its role in supporting Israel militarily, economically and politically, at Security Council it used veto power 21 times against Palestine. We want strong United Nations to solve conflicts between countries. We want to see UN resolutions mandatory, said Ambassador Rabei.