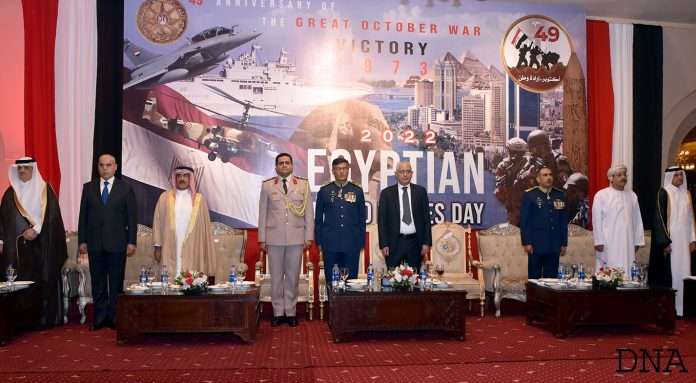 The reception was attended by Dr. Tarek Dahroug, Ambassador of the Arab Republic of Egypt and a large number of guests hailing from various segments of the society.

Col Mahmoud in his speech thanked the guests for honoring the Celebration Ceremony of the forty-ninth anniversary of the glorious October victories. He also conveyed the greetings of the Commander-in-Chief of the Egyptian Armed Forces, Minister of Defense and Military Production, on this auspicious occasion.

He said,  the sacrifices and heroisms made by the heroes of the Egyptian armed forces to achieve this great victory will remain immortal in the conscience of every Egyptian and a witness to the solidity of the Egyptian people and an inspiring model in hard work to elevate the people of Egypt, preserve its soil and preserve its dignity.

Col Mahmoud added, days pass, years pass by, ideas change, forms of conflicts change, and here we find the threat of terrorism targeting our countries, and Egypt, with all its institutions, is making efforts and precious sacrifices to preserve the security of this beloved country Egypt.

The memory of the glorious October victory celebration always brings to the minds of the Egyptian people the magnitude of the challenges that they were able to overcome to reach the present in which Egypt is writing a great success story that began years ago, where Egypt achieved with strength and determination ambitious plans for construction and development despite the growing internal and external challenges. The Egyptian and Pakistani armed forces face the same challenges, and the military leadership of the two brotherly countries has set itself a goal of enriching cooperation relations to fruitful prospects that contribute to overcoming these challenges.

‘The two countries have always supported each other in all sincerity in many difficult time, Thus I took this opportunity to offer my sincere condolences to the Pakistani armed forces and the people of Pakistan on the victims of the recent massive floods, praying to Allah Almighty may bless the dead with mercy and inspire their relatives patience and solace’.

While concluding his speech he prayed to Allah Almighty to have mercy on the martyrs and heroes of the Egyptian and Pakistani armed forces who sacrificed their precious blood to preserve their homelands … and wished more prospects for cooperation between the two sides.

HE also thanked the leaders of the Pakistani armed forces for their keenness to build trust between the two sides.