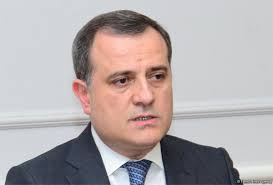 BAKU: Azerbaijan will take all measures to bring to justice the perpetrators of crimes against Azerbaijanis committed during the First Karabakh War in the early 1990s and the 44-day Second Karabakh War in 2020, Foreign Minister Jeyhun Bayramov has said.

Bayramov made the remarks in an address to the High-Level Segment of the 46th session of the UN Human Rights Council, which was posted on the website of the Azerbaijani Foreign Ministry. 2021 has been proclaimed as the International Year of Peace and Trust by the relevant UNGA [UN General Assembly] resolution.

This year will also be remarkable for Azerbaijan since it enters into the post-conflict recovery and rehabilitation phase following the liberation of its territories from almost 30-year-old occupation… Series of grave crimes have been committed by Armenia against the civilian population of Azerbaijan, as well as its cultural heritage and infrastructure throughout the years of occupation.

Azerbaijan is determined to take all measures stemming from its rights under relevant bilateral and multilateral mechanisms to bring the perpetrators of those crimes to justice; Bayramov said.

The minister said that the recent aggression by Armenia which started on 27 September against Azerbaijan was accompanied by grave violations of international humanitarian law tantamount to war crimes and crimes against humanity in order to seed the panic among the civilian population of Azerbaijan.

For this purpose, Armenia deliberately attacked the densely populated civilian settlements of Azerbaijan located far from the conflict zone, as a result of which 101 civilians were killed more than 400 seriously injured. There have also been undeniable facts depicting a number of human rights violations by Armenian servicemen against Azerbaijani captives, including acts of humiliation and ill-treatment, such as physical assault, verbal abuse, executions through beheadings, and ill-treatment of dead bodies.

Bayramov added that Armenia in an open attempt to cover-up its above-mentioned wrongdoings brazenly accuses Azerbaijan of the same with a view to diverting the attention of the international community, and to that end carries out a massive campaign of fake news. UN human rights mechanisms, including the OHCHR, treaty bodies and mandate-holders have also been subjected by Armenia to its fake propaganda.

He stressed that having exploited the political settlement process, as well as Azerbaijan’s commitment to this process for almost 30 years, Armenia took consistent steps to consolidate the results of occupation of territories of Azerbaijan aiming at their annexation.

This included, among others, implantation of settlers into the occupied territories, destruction, pillage and looting of historical and cultural heritage, illegal exploitation of natural resources, misappropriation of private and public property in the seized lands.

The minister noted that the de-occupation of territories of Azerbaijan paves the way for hundreds of thousands of displaced persons to exercise their right to safe and dignified return to their places of origin.

Yet, the unprecedented magnitude of destruction of public and private property, critical civilian infrastructure, including educational and medical facilities, as well as historical and cultural heritage and the environment in the conflict-affected territories places a huge task ahead of the Government of Azerbaijan in terms of rehabilitation and reconstruction of these territories.

The Government has already initiated practical steps in order to enable the safe and dignified return of the displaced population and ensure peaceful co-existence within the sovereignty and territorial integrity of Azerbaijan, he underlined.

Bayramov said that sustaining peace, rehabilitation and reconstruction activities, providing humanitarian assistance to those in need, including returning IDPs and refugees, should be an absolute priority.

To this end, Azerbaijan is ready to work with relevant international partners, including ICRC, UNHCR and other UN agencies as well as individual States willing to contribute to peace and stability in the region, in full compliance with the UN Guiding Principles on humanitarian assistance of 1991, he said.

The minister added that such an approach is based on international law, relevant resolutions and documents regulating the UN’s activities in the fields of humanitarian assistance, post-conflict rehabilitation and reconstruction, and will serve as a confidence-building measure aimed at healing the wounds of the conflict.

Bayramov said that Azerbaijan is resolute to re-integrate its citizens of Armenian origin residing in the conflict-affected territories into its political, social, economic space, guaranteeing the same rights and freedoms with all the citizens of Azerbaijan regardless of their ethnic, religious affiliation. He stressed that Azerbaijan constitution provides a solid legal framework for this.

He noted that the trilateral statement signed by the Azerbaijani, Russian and Armenian leaders on November 10, 2020, commits both Armenia and Azerbaijan to cease all military activities while taking series of steps aimed at eliminating the decades-long conflict. Azerbaijan attaches vital importance to the full implementation of this document both in letter and spirit and to healing the wounds of the bloody conflict on the basis of normalization of inter-state relations between Armenia and Azerbaijan. It is our firm belief that the international community, led by the UN, has an important role to play in supporting the implementation of the trilateral statement, which promises the restoration of good neighborly relations in the region, Bayramov said.

The minister noted that strengthening democracy and protection of human rights are among the top priorities of the Republic of Azerbaijan. The ongoing reforms carried out in the country encompass a wide range of activities, including the recent initiation of dialogue with political parties, support to the development of media, creating better conditions for people with disabilities, empowerment of women and youth, widening the scope of transparent and efficient public service delivery, he said.

Bayramov stressed that Azerbaijan enjoys fruitful cooperation with UN human rights mechanisms. In order to support the important work of the Office of the High Commissioner for

Human Rights, Azerbaijan regularly makes and will continue to make financial contributions to the OHCHR. We recognize the important role of the special procedure mandate holders of the Human Rights Council in promoting human rights through cooperation and dialogue with the Member States. Therefore we have an extended-standing invitation to all mandate-holders, he said.

Bayramov added that the session takes place in a time when the COVID-19 continues to pose a major challenge to humanity. Azerbaijan immediately responded to the pandemic and implemented effective containment measures to halt the spread of COVID-19 by adopting a human rights- based approach to ensuing socio-economic problems.

Azerbaijan did not confine its efforts to domestic achievements. The Government of Azerbaijan has donated 5 million US dollars to the World Health Organization in support of global efforts and additional 5 million US dollars in its capacity as the Chair of NAM to support the most affected NAM [No-Aligned Movement] countries. Azerbaijan has also provided urgent humanitarian aid to more than 30 affected countries on a bilateral basis, he said.

The minister added that the UN General Assembly&#39;s special session on COVID-19 convened upon Azerbaijani President Ilham Aliyev’s initiative, in his capacity as the incumbent Chair of NAM, on 3-4 December 2020 reaffirmed the importance of coordinated global response based on unity, multilateral cooperation, solidarity and respect for human rights.

Bayramov said that the international community needs to act now in solidarity, not only to respond to the ongoing health crisis but also to build a just and sustainable future.

The President of Azerbaijan, in this regard, expressed his serious concern over the unequal and unfair distribution of vaccines against COVID-19 between developing and developed countries. Using this opportunity we call on all states, international organizations, international donor community, vaccine producers and other stakeholders to ensure affordable, unhindered, timely and equitable access by all countries to the vaccines against COVID-19, he said.

KARACHI: The most anticipated game of the Pakistan Super League (PSL) between arch-rivals Lahore Qalandars and Karachi Kings will be played at...
Read more

ISLAMABAD : Coronavirus has claimed 23 more lives in Pakistan in the past 24 hours, surging the overall death toll to 12,860.
Read more

Islamabad, 28 Feb 2021 – The defense experts speaking at a webinar termed the Indian willingness to restore the ceasefire agreement on...
Read more

KARACHI: The most anticipated game of the Pakistan Super League (PSL) between arch-rivals Lahore Qalandars and Karachi Kings will be played at...
Read more

ISLAMABAD : Coronavirus has claimed 23 more lives in Pakistan in the past 24 hours, surging the overall death toll to 12,860.
Read more

Islamabad, 28 Feb 2021 – The defense experts speaking at a webinar termed the Indian willingness to restore the ceasefire agreement on...
Read more