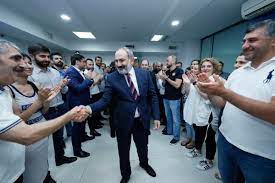 Pashinyan’s Civil Contract party swept to an easy victory with almost 54 percent of the vote, overcoming anger at his handling of the devastating fight for control of the Nagorno-Karabakh region and securing a strong majority.

The embattled prime minister announced the gamble of snap polls earlier in the year, when protests against his rule were coming to a head, and after Pashinyan claimed he had fended off a coup attempt from military leaders.

Protests against Pashinyan’s rule and calls from the opposition for him to stand down began in November last year when he signed an unpopular peace deal mediated by Moscow to end fighting with Armenia’s long-standing enemy Azerbaijan.

The two countries fought a vicious six-week war last year which claimed some 6,500 lives.  In the runup to the polls, Pashinyan said Armenia had lost 3,705 people in the war, whose conclusion saw him hand over large areas of land to Azerbaijan.

Pashinyan on Monday morning visited a military cemetery kneeling and laying flowers at the graves of soldiers.

Sunday’s vote was seen as a two-horse race, with both Pashinyan, 46, and his main rival — former president Robert Kocharyan, 66 — drawing massive crowds in the run-up to the polls.

Kocharyan, whose alliance lagged behind with 21 percent, alleged foul play.

“Hundreds of signals from polling stations testifying to organised and planned falsifications serve as a serious reason for lack of trust” in the results, his bloc said in a statement.

It said it would not recognise results until “violations” were studi

The general prosecutor’s office said by Sunday evening it had received 319 reports of violations. It said it had opened six criminal probes, all of which concerned bribes during campaigning.

Armenia won international praise for holding its first free and fair vote under Pashinyan in 2018, and election observers from the Organisation for Security and Co-operation in Europe were due to hold a press conference later Monday to announce their findings from this poll.

Kocharyan was himself accused of rigging a presidential election in favour of an ally and presiding over a deadly crackdown on protesters in 2008.

Besides Kocharyan, who hails from Karabakh and was in power between 1998 and 2008, two other leaders of post-Soviet Armenia backed parties in the ra

During a venomous campaign, candidates exchanged insults and threats. Pashinyan brandished a hammer at rallies, while Kocharyan said he would be ready to fight the prime minister in a duel.

The vote was being followed by Armenia’s Soviet-era master Russia, arch-foe Azerbaijan and its backer Turkey, which was seen as a key backer of Azerbaijan in the war over Nagorno-Karabakh.

Pashinyan, who had spent time in jail as an opposition politician, was celebrated as a national hero when he swept to power in a peaceful revolution in 2018.

But his decision to end the war with Azerbaijan and hand over territory Armenian forces had controlled for decades ignited protests.

The election was his answer to protracted calls from within the highest levels of Armenia’s political leadership — including the president and military leaders — who had demanded his resignation over the country’s humiliating defeat.