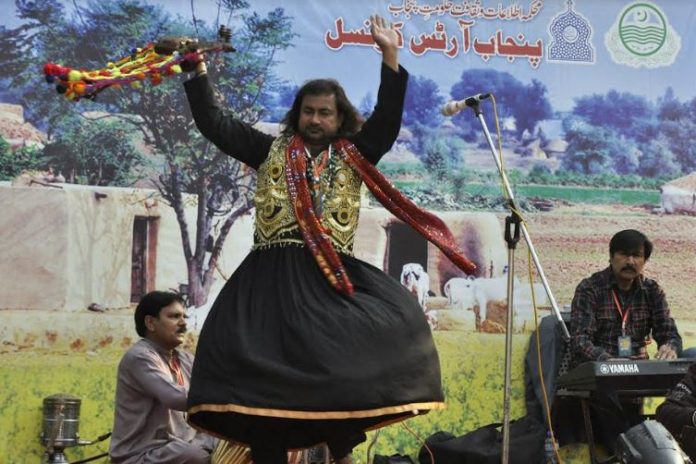 ISLAMABAD, /DNA/ – The ten-day ongoing ‘Lok Mela’ (Lok festival) is attracting a large number of people, especially the exhibition of artisans-at-work has proven to be a major attraction for visitors.

Over 500 craftspeople are seen actively demonstrating their work in artistically designed cultural pavilions, putting their creativity into arts and crafts, to mesmerise spectators with their unique work at Lok Virsa.

Being a prime institution dealing with Pakistani folk culture, Lok Virsa was cognizant of the need for gender equality which is seen in each event that it holds from time to time, because in this way both male and female practitioners afford equal opportunity of showcasing their talent and getting due recognition thereof, said the organizers.

In the present event too, one can see a number of female artisans demonstrating their skills. The most prominent among them are Kaneez Fatima and Shakar Bibi from Balochistan. They practice Balochi embroidery and have carried on this centuries-old tradition from their mothers and devoted 30 to 35 years of their life to this profession. They stand out not only for their excellence but also for their tireless propagation of this art by imparting it to future generations.

Another craftswoman Pari Bibi, a 70-years old artisan, hailing from Badin, Sindh weaves ‘Farasi’ [traditional rug] and has expertise in the art of weaving since her childhood.

Male artisans are also equally good at showing their artwork. Muhammad Waseem, lacquer work from Khyber Pakhtunkhwa is showcasing an excellent display. His father was also an accomplished master craftsman of lacquer art who received a pride of performance award in recognition of his talent.

Ameer Bukhsh is an expert in natural dyes from Kahror Pucca. The ancient art of wooden block making has its centres in the lower Indus valley encompassing southern Punjab and all of Sindh. He has not only trained his family members but also imparted training to many artisans in other crafts of textiles.

Hajira Bibi from Bahawalpur is an accomplished artisan in basketry. She makes colourful baskets Changair and decorate items from fibroin plants.

Pakistan with its rich and varied heritage has a craft tradition of more than 9,000 years dating back to the Mehergarh civilization in Balochistan, which reveals the earliest evidence of pottery production.

The Indus Valley civilization of Mohenjo-Daro in Sindh and Harappa civilization in Punjab (5,000 B.C) indicates impressions of woven cloth production from cotton and wool. The historical influence still to be seen in the form, design and colour of Pakistani handicrafts is essentially Islamic, a fusion of Turkish, Arab, Persian and indigenous Mughal traditions.

The crafts represent a valuable material heritage, which forms a tangible part of our historical and contemporary culture. Unlike the west, most traditional crafts in Pakistan are neither a profession nor a hobby, but an essential component of the diverse cultural patterns—a product of the ethnic and communal attitudes and practices, the organizers highlighted.

As such, crafts have meanings and definite social context in traditional society. However, the rise of the industrial age is erasing this craft heritage, even in rural areas. But there is a recent trend towards the use of crafts as art objects in urban homes. Historic forms and designs are being revived both by the increasing number of trained craftsmen and by designers for the tourist and export trade.