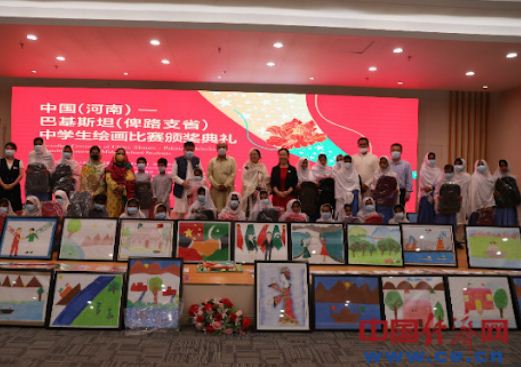 The ceremony was organized by China Overseas Ports Holding Company (COPHC) and co-hosted by the People’s Government of Henan Province, the Government of Balochistan and the Chinese Embassy in Pakistan.

The report stated that the 70th anniversary of the establishment of China-Pakistan diplomatic ties is around the corner.

Nearly 20,000 Chinese and Pakistani teens attended the contest to depict their understanding and expectation of each other’s country, the Belt and Road Initiative (BRI) and China-Pakistan Economic Corridor (CPEC).

Huo Jinhua, Vice Governor of Henan Province addressed the ceremony and presented prizes to the winners.

“Henan, the cradle of the Chinese Nation and Civilization, is an important province in China in terms of population, society, economy, science and technology.

Nong Rong, Chinese Ambassador to Pakistan, congratulated the winners at the ceremony.

He underlined that China and Pakistan are all-weather strategic partners, sharing weal and woe. “As the flagship project of BRI, CPEC has made great contributions to Pakistan’s economic development and regional interconnection.

Moin-ul-Haque, Pakistani Ambassador to China alsi addressed the ceremony, stating Pakistani people will never forget the selfless assistance given to Pakistan by the Chinese government and people.

“Particularly at the most difficult moment when the epidemic was raging, China provided Pakistan with urgently needed COVID-19 vaccines, saving incredible amount of Pakistani lives,” he said.

He said that cultural exchange activities will enhance mutual understanding between young people of both countries who are inheriting and carrying forward China-Pakistan friendship.

At the ceremony, the Affiliated Middle School of Henan Normal University was twinned with Gwadar Faqeer Middle School.