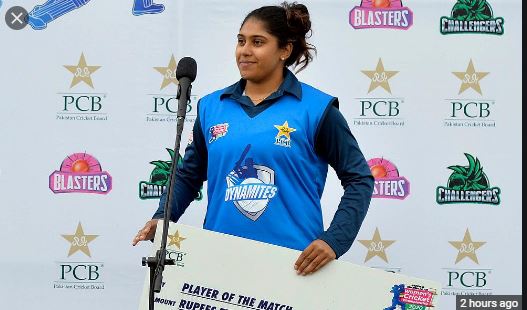 Opener Ayesha Zafar and middle-order batter Iram Javed starred for the
Dynamites in their convincing chase of the 138-run target which was
completed in 19.1 overs.

For PCB Dynamites, Ayesha lead the way with her 65-run innings of 50
balls. Iram remained unbeaten on 40 off 30 balls.

Ayesha hit 10 fours and one six in her innings while Iram cleared the
boundary four times (four sixes) and hit one four in her punishing knock
that settled the game in the favour of PCB Dynamites.

Earlier, PCB Dynamites won the toss and opted to field first, PCB
Blasters scored 137 for four in their allotted 20 overs.

Javeria Rauf top-scored with 35 off 32 balls, her innings included two
fours and two sixes. Aliya Riaz lifted the run-rate with a stroke-filled
unbeaten 34 off 22 balls; she hit six fours in her innings.

In the second match of the tournament PCB Blasters will play PCB
Challengers tomorrow at the same venue. DNA