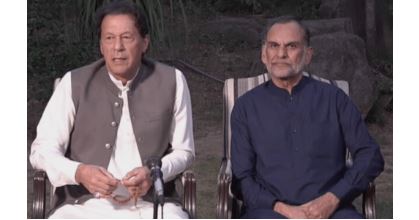 ISLAMABAD, NOV 28: PTI Chairman Imran Khan on Monday questioned the applicability of Article 14 of the Constitution — which refers to the “Inviolability of dignity of man” — as he decried the alleged torture, “video leak” and rearrest of party senator Azam Swati.

Addressing the Supreme Court in a tweet, the former premier asked if the provision was “only applicable to the powerful of the State”.

Imran and other PTI leaders have been lamenting the alleged custodial torture of Swati along with the leak of an objectionable video, purportedly of the senator with his wife.

Party leaders have also filed petitions in the SC registries for various “important matters” including the assassination attempt on Imran and the purported video of Swati with his wife.

In his tweet today, the PTI chief asked the top court whether Article 14 was only applicable to “the powerful of the State and for everyone else, there was “no protection of their basic human dignity”.

“Swati was stripped naked, tortured, and humiliated through an illegal video sent to his wife. For weeks he has sought justice from the SC to no avail and upon expressing his anger and frustration he was put in jail,” Imran said, adding that at least 15 FIRs were registered against the senator from across Pakistan.

Addressing the judges again, he repeated his question: “Is the Article 14 Constitutional provision only to be applied selectively for the high and mighty state functionaries?”

Article 14 of the Constitution states that the “dignity of man and […] the privacy of home shall be inviolable” and that “no person shall be subjected to torture for the purpose of extracting evidence”.

Imran’s questions come a day after the Federal Investigation Agency (FIA) arrested Swati — the second time in less than two months — over strongly worded tweets against senior military officials. He was later remanded into the agency’s custody for two days.

Separate FIRs were filed against the PTI leader in Balochistan and Sindh as well for using “derogatory language” and “provoking the people against the army”.

Meanwhile, later in the day, the detained senator moved the Islamabad High Court (IHC) against his arrest.

The petition asked the court to direct the first four respondents to adhere to the “lego-constitutional and fundamental rights” of the petitioner as well as present the details of the FIRs registered against Swati throughout the country.

Further, the petition also urged the court to direct the interior ministry secretary and the FIA DG to not shift the senator outside the court’s jurisdiction. It further said that the petitioner had “reliable information and strong apprehension of his custodial killing”.

“In addition to his private moments being filmed and sent to the children of the family, the petitioner is being subjected to every possible inhumane treatment.”

It stated that the “malicious campaign” against Swati was “life-threatening and hazardous” and was ongoing. The plea argued that it was “impossible” for Swati to know the exact number of cases registered against him on “singular allegations”.

It pleaded that as a result, Swati was unable to engage with lawyers and protect himself which was a blatant violation of his fundamental rights.