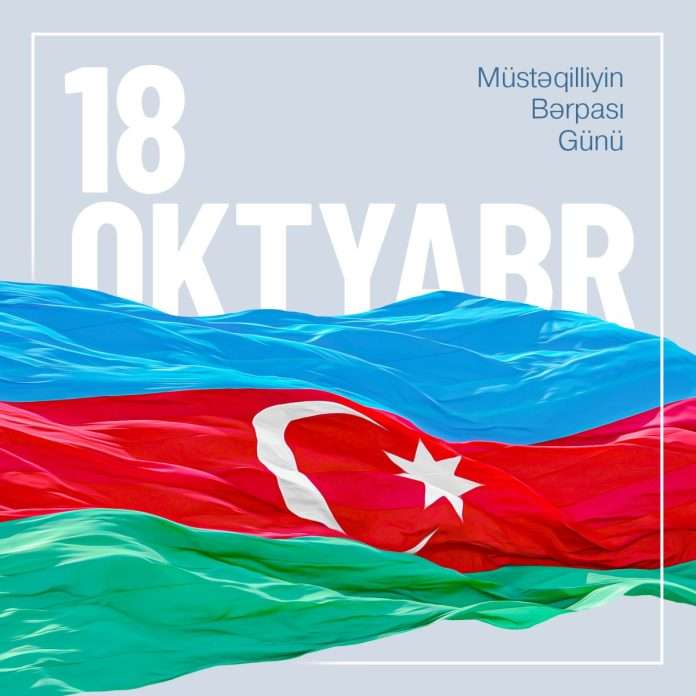 This year, on October 18, the Republic of Azerbaijan celebrates the 31stAnniversary of Restoration of its Independence.

History proves that to preserve independence is much more difficult than to gain it. Life has turned out that for the century Azerbaijan had to regain its sovereignty twice. Unfortunately, the first opportunity was lost shortly and the Azerbaijan Democratic Republic, which was established in 1918, existed only 23 months.

Azerbaijan could ensure its state independence after the collapse of the Soviet empire in 1990s. The Constitutional Act on the State Independence of Azerbaijan was adopted on October 18, 1991, at a session of the Supreme Council of the Republic of Azerbaijan. With this significant historical document, the Azerbaijani people gained long-awaited freedom after years of oppression. On March 2, 1992 Azerbaijan became a member of the UN.

The first years of independence was not easy for the young sovereign country and it faced tremendous difficulties. On the one hand, the Armenian military aggression continued, on the other hand, the economy was in a paralyzed due to the collapse of the existing system, and internal stability was disturbed in the country. There were concrete threats and risks to Azerbaijani statehood. Namely in that hard period the great Leader Heydar Aliyev returned to Azerbaijan and came to power in 1993 upon insistant demand of Azerbaijani people. Heydar Aliyev eliminated the chaos and anarchy, economic, political, spiritual and psychological tensions. Independent Azerbaijan marked a new course of development. Thus, he made the country’s independence eternal and irreversible.

Today, Azerbaijan, under the leadership of President IlhamAliyev, is one of the rapidly developing countries of the world from not only economic points of view, but also all spheres.

Azerbaijan has become a leading country in the region, which has achieved a stable domestic political situation and sustainable economic development.

Azerbaijan has become a major player, actively initiating huge projects to bring stability and security to the region. The Baku-Tbilisi-Ceyhan oil pipeline, Baku
Tbilisi-Kars railway route, the South Caucasus Pipeline, TANAP and TAP projects could greatly contribute to the prosperity of the nation.

The Republic plays an active role in the creation of transport corridors, forming a modern transport infrastructure in the region. It is not just coincidence that the East-West and North-South transit routes pass through Azerbaijan.
Energy projects implemented under the leadership of Azerbaijan, not only serve the welfare of the nation, but also serve in the interest of European energy security.

Azerbaijan, as an independent state, expanding and deepening its activities at the regional and global levels, including cooperation in the international arena, has become a member of the United Nations (UN), the Organization of Islamic Cooperation, the Organization for Security and Co-operation in Europe (OSCE), the Council of Europe.

Azerbaijan skillfully uses its economic and political potentials to realize its own national interests, as well as strengthen regional and global positions. Under the leadership of H.E. Mr. IlhamAliyev, Azerbaijan is recognized as a leader in the region and a reliable partner in the international arena.

Right after the liberation, Azerbaijan started a massive reconstruction and restoration works in the liberated areas.

In 2021 and 2022, the Azerbaijani Government allocated nearly $3 billion to the large-scale reconstruction and restoration activities in the liberated lands. Fuzuli International Airport which was built just in 8 months is operational now. 2 more international airports namely Zangilan and Lachin are under construction and they will be also operational very soon.

First Azerbaijani IDPs have already returned to liberated Zangilan region’s Aghali village, which was rebuilt based on the “smart village” concept.

Shusha, the cultural capital of Azerbaijan has already become a venue for international events. “Pakistan Colors” group performed the “Bhangra” dance at the 5th “Kharibulbul” International Folklore Festival which was held in Shusha in May 2022.

Now, bringing the new reality to the region which will lead to opening all transport communications, Azerbaijan will ensure peace, development and security in the region.

It should be noted that Pakistan was one of the first countries that recognized Azerbaijan’s independence and from the first day of former Karabakh conflict, as well as the during Patriotic War in 2020 morally and politically supported just position of Azerbaijan.